In dissecting ‘the Oceanic Project’, we began by interpreting the term ‘oceanic’ as a pre-marked and changing maritime canvas of possibilities, continuously being shaped by natural forces and anthropic powers. Simultaneously, we understand the term ‘project’ to be an anthropic one, implying both the forecasting of the future canvas (‘projection’) and designing for that future (a design ‘project’).

Given the anthropic slant of this definition, we also apply a lens which defines actors with significant ability to shape the canvas (POWER) which exist as ISLANDS within the territory. Beyond these islands we define a peripheral EDGE as their limit. Sometimes this edge is productive, sometimes it is forgotten. In either case, the edge is thus far removed from the decision making island of power. Our analysis sought to address anthropic islands of power, and the lack of it at the edge. Our definition carries an implicit hierarchy, where power > island > edge.

Before attempting to project/envisage changes to the canvas, we sought to define key elements
that produce power. We suggested that trade, economy, legislation, education, population flows and land value were indicative of power and in turn indicated actors with significant ability to shape the Oceanic Project’s canvas, and were consequently worth investigating. 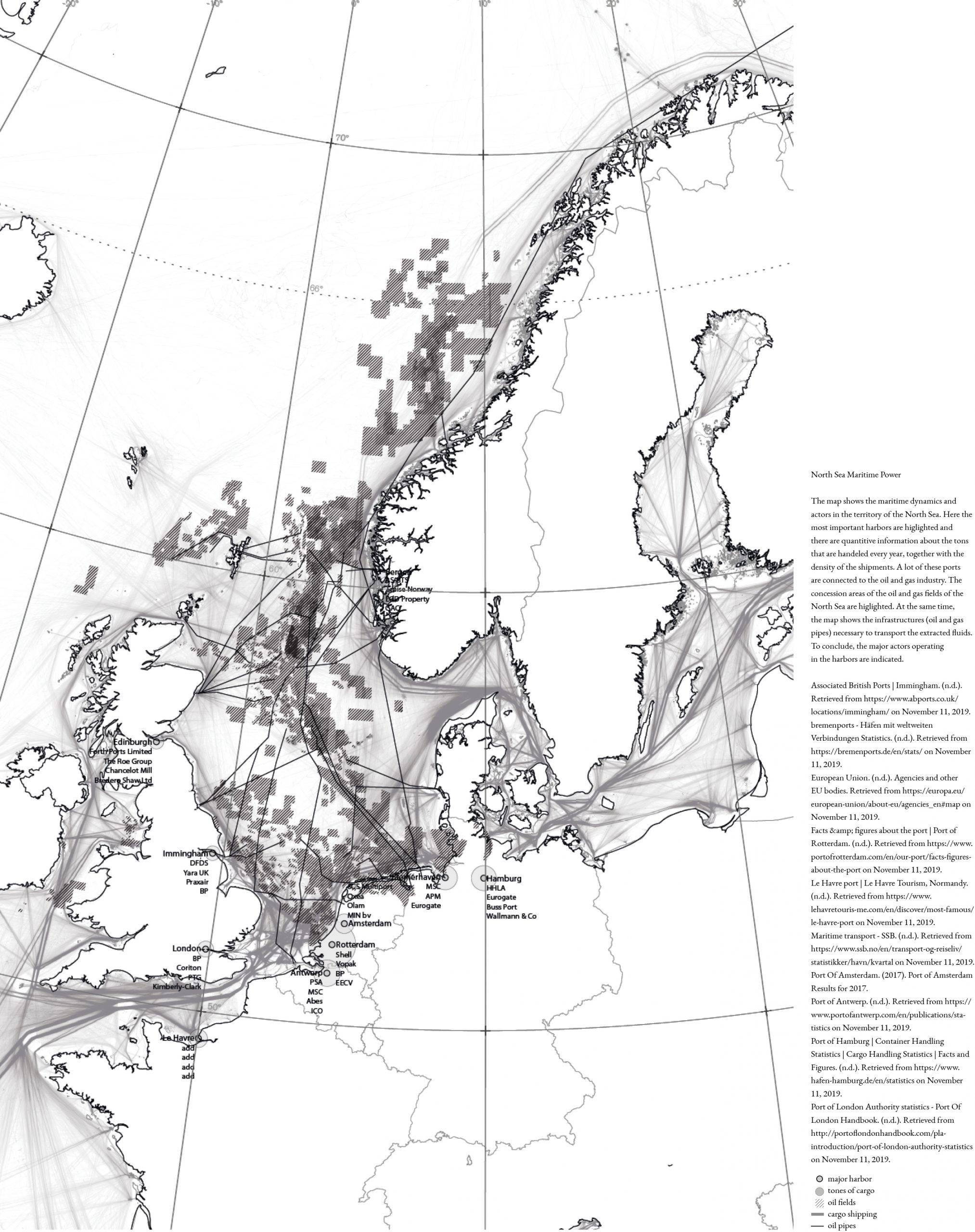 After mapping the current incarnation or power > island > edge, we then set about deconstructing how such a map came to be so. We sought to do this by introducing the notion of time and consequently deconstructing the power>island>edge model through the last centuries. Our broad conclusions are as follows:

18th Century – Mercantilism sees power cities as key trading centres. These generally (but not exclusively) lie on the coast. Land and see are productive and support these cities
19th Century – Industrialisation sees rapid growth of select cities around the coal belt in Europe. Power largely focussed in capitals and population of cities begins to rise. Mass production possible due to exploitation of territory
20th Century – Consumerism sees trade and continued exploitation of territory support power islands further. Population of cities continues to grow in relation to population of territory
21st century – Globalisation and Digitalisation sees separation of production of power from power islands, further reflected by the shift to oil fields in the far north. Power Islands in the southwest hold however.

The Oceanic Project must ask if this self-perpetuating power-island model (urbanisation) can be sustained as is or ad infinitum. As the oceanic canvas changes, projections indicate a warming, increasingly polluted climate; the increasing importance of data and digitalisation of societal structures; a necessary energy transition; an increasing population (until 2050), and consequently an acute need for expanded/improved food production. Thus, project action in the design sense must take these or other changes and seek to test if the current power-island model holds, whether it requires a new series of power-islands, or whether the power-island model holds at all.

Taking the wielding of power and the production of power as two axes for a quadrant of scenarios (ranging in each case from high centralisation > high territorialisation) we proposed four scenarios for how the North Sea canvas might look. We think it is important to position a project in relation to these scenarios. This is important because by doing so one can begin to identify which pillars might survive the expected changes, which will fail, and perhaps potential new pillars which do not yet exist. This is done with the intention that design intervention (which we will approach later in the studio) can be enacted at logical points (points which will survive the changes or which will be required to replace others)- ensuring that it contributes to a positive future and not in doggedly propping up some broken pillars of the past.

This, for us, is the Oceanic Project.

Stefano Agliati – From Landscape to Landscape: Multifunctional adaptation strategies for the Scheldt estuary

Daniele Ceragno – Unveiling the Dichotomy: Geographies of production and romantic memories in the eastern Flemish coast

Gioele Colombo – Gizmo: The Theatre of Automation in the post-labour society of Hammerfest

Ian Omumbwa – Healthcare in Transition: Architectures and processes at the convergence of healthcare and technology