In recent decades, it became increasingly evident how human activity plays an important role is in the ecological balance of our planet. As David Harvey suggests, there is “no zone of reality in which we could casually rid ourselves of the consequences of human political, industrial and economic life” (Harvey, 1973). Such consequences frequently bring economic gains against environmental damage, while the social impact seems to fluctuate in between benefits and drawbacks, thus the definition of externalities for agents that exhibit controversial and double effects.

As third parties, both natural forces and human-engineered intrusions into natural systems (such as emis-sions, ground pollution and salinization) are deeply reshaping the world we are living. And in the North Sea, seen as a territory in which the perspective of extreme extraction, production and consumption and extreme weather can become ordinary, the risks of those changes get more and more relevant.

The important economic benefits from resources and the desire for further development explain extreme extraction. Though these processes have greatly improved environmentally, several renewable resources are now becoming non-renewable. Moreover, the chronic negative impacts of heavy metal pollution and soil depletion will induce not only environmental harm but eventually human health issues and even social injustice.

The current extreme production model largely foresees the use of fossil fuels as a primary energy source and their refining involves the release of large quantities of greenhouse gases into the atmosphere. These phenomena of anthropogenic origins are in turn causing the destruction of agricultural crops, difficulties in supplying of fresh water and the impairment of entire habitats.

Extreme consumption patterns manifest in space as litter and chemical pollution, and are primordarly stored in landfills, brownfills and other waste management facilities. Since consumed externalities are supposed to have already “performed’ their anthropogenic function, their disposal and dispersal is less carefully regulated.

Extreme weather events display a mismatch between the different effects they have in space and time. The increased frequency of droughts, for instance, will severely damage agriculture in many European countries, but on the other hand, their action is considered to be beneficial for wheat yields in Norway and part of the United Kingdom in the next future.

Climate Change, as a ultimate consequence of that, responds to the increase of externalities at a pace that depends on the intensity of our activity. The RCPs define possible scenarios in which, despite of the time needed, changes are still happening and where we are called to act. In our next future, the definition of a New Climatic Regime, in which political decisions are merely based on a lack of resources, seems inevitable. Migrations and the rise of inequalities all over this territory, as two symptoms of a single historical situation, will thus be the most relevant outcomes of a world of extremes. In other words, economic and environmental impacts of emissions, pollution, salinisation and extreme weather will, in our view, strongly be reversed on society, that will have to pay the return costs of inconsiderate actions. And the four scenarios here proposed illustrate the ways in which these costs will have to be managed.

In order to synchronize the North Sea with the capacity of its ecological systems, we have to strive for a better management of resources, and eventually for a transition towards a regenerative feedback-loop con-figuration. Only by working on the extreme conditions of extraction, production and consumption – linked to the dynamic change of weather patterns – we can hope for a better future and a healthier society.

‘Maps can be one of our most powerful tools in changing humans’ understanding of the ocean […] Seeing information layered in insightful ways will make what exists in the space of the ocean more visible, thereby contributing to more developed scientific and lay understandings of its complex conditions.’ (Graham, 2016)

Inspired by this and the idea of fractality shown in the film The Power of Ten by Charles and Ray Eames, the following exercise of cartography takes into account two scales: a process and a system scale. Display-ed in the following chapter is a recollection and selection of diverse data containing resources, structures and actors involved in the activities of extraction, production and consumption that are modifying climatic processes and causing hazards in the North.

In order to have a multiscalar understanding of the dual nature of externalities each map was complimented with a small diagram indicating the local process that an specific externality goes through to finally reach a water body. This way we could understand at what stage of the process an resource or action becomes an externality, triggering negative events.

Through critical mapping we identified areas where certain resources, actors and structures are accumula-ting more than in other places, thus stressing the given environment and therefore putting them in risk. 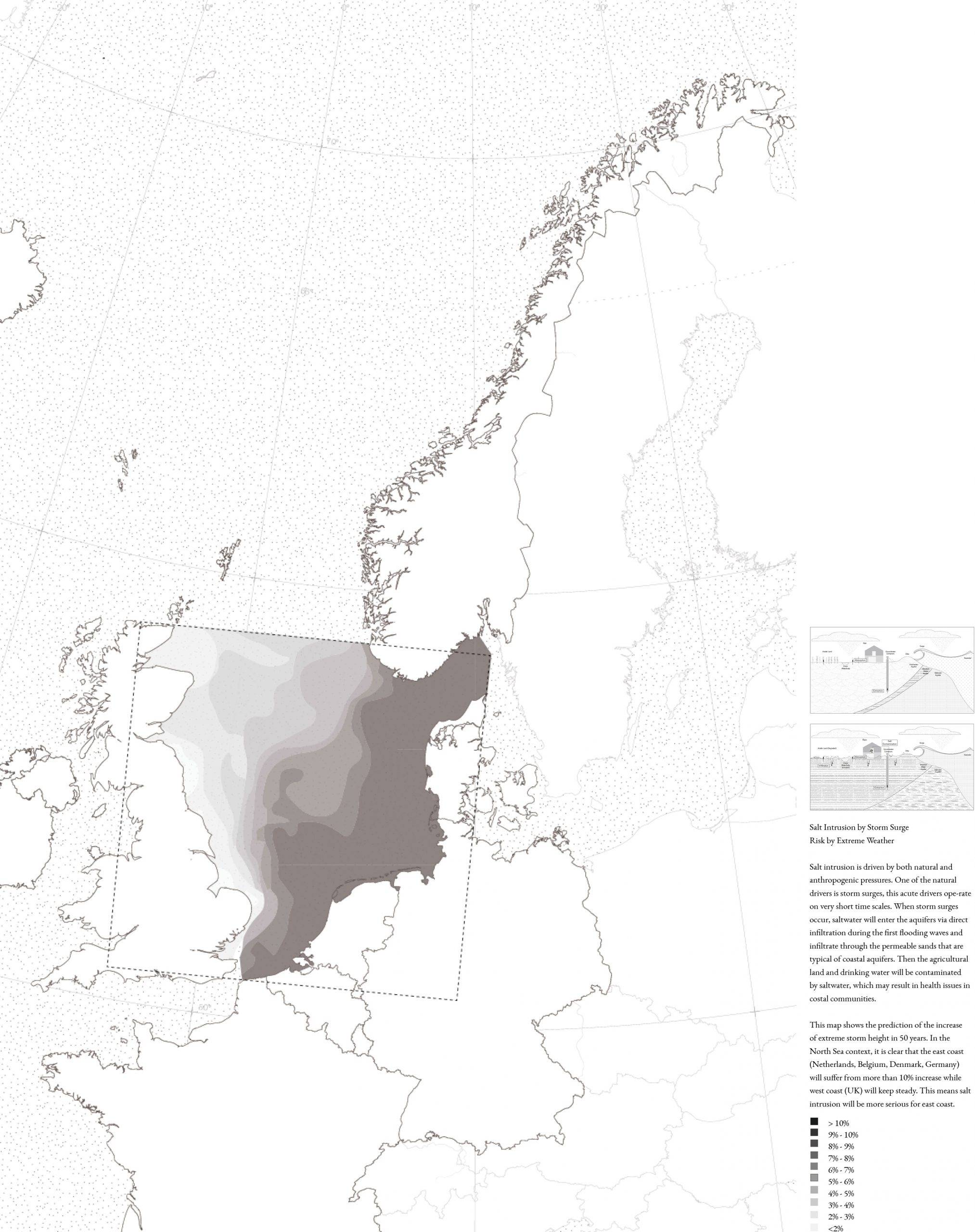 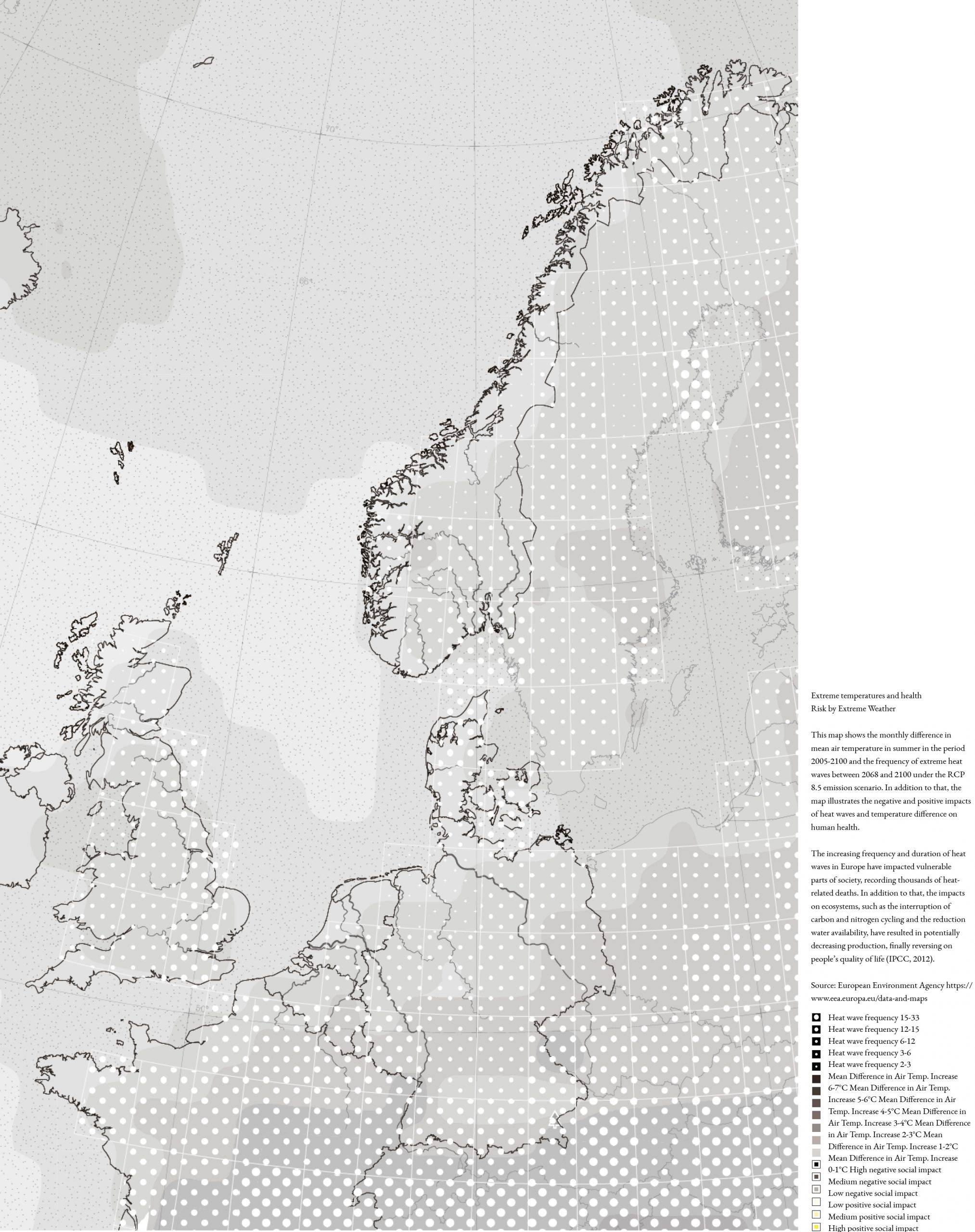 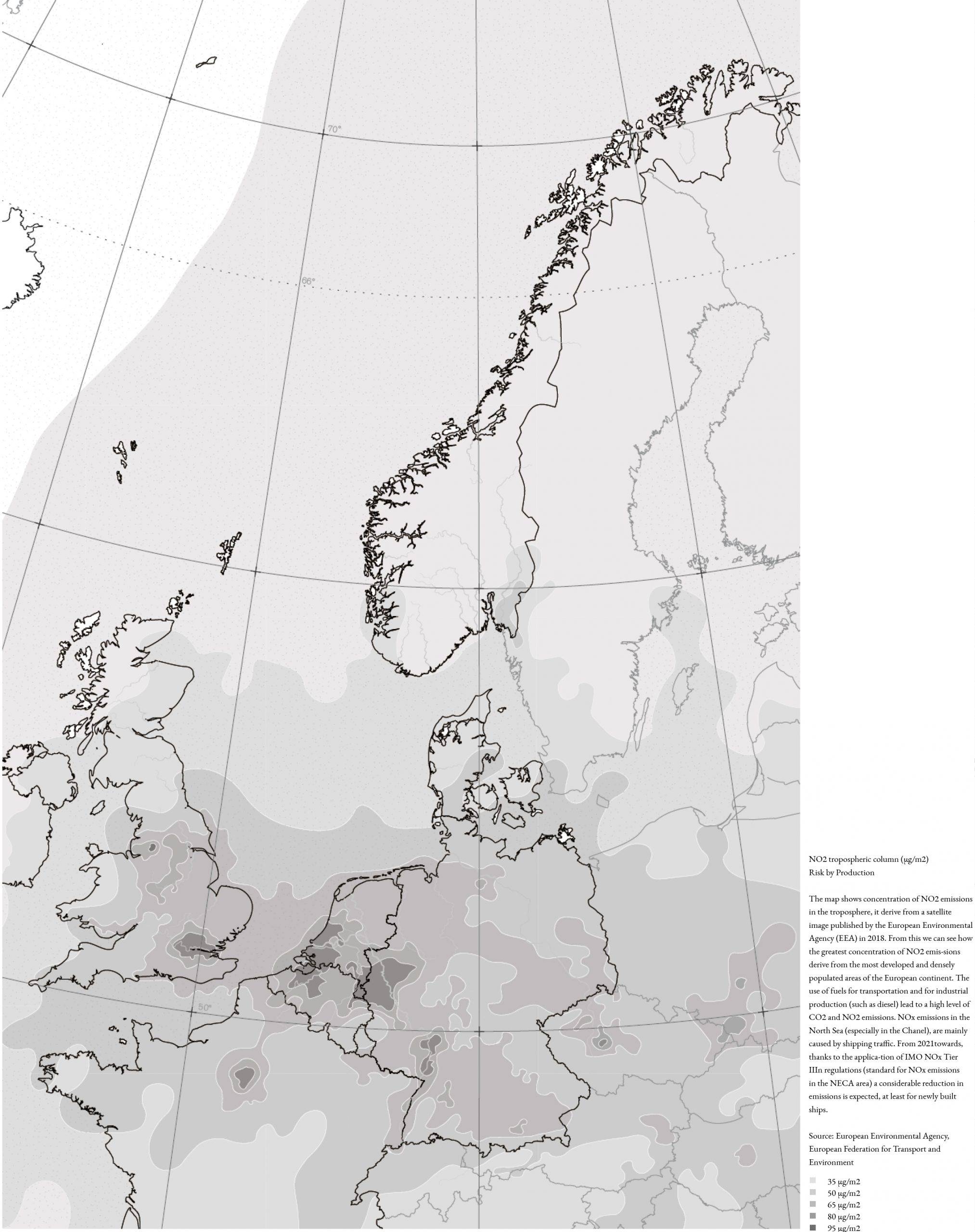 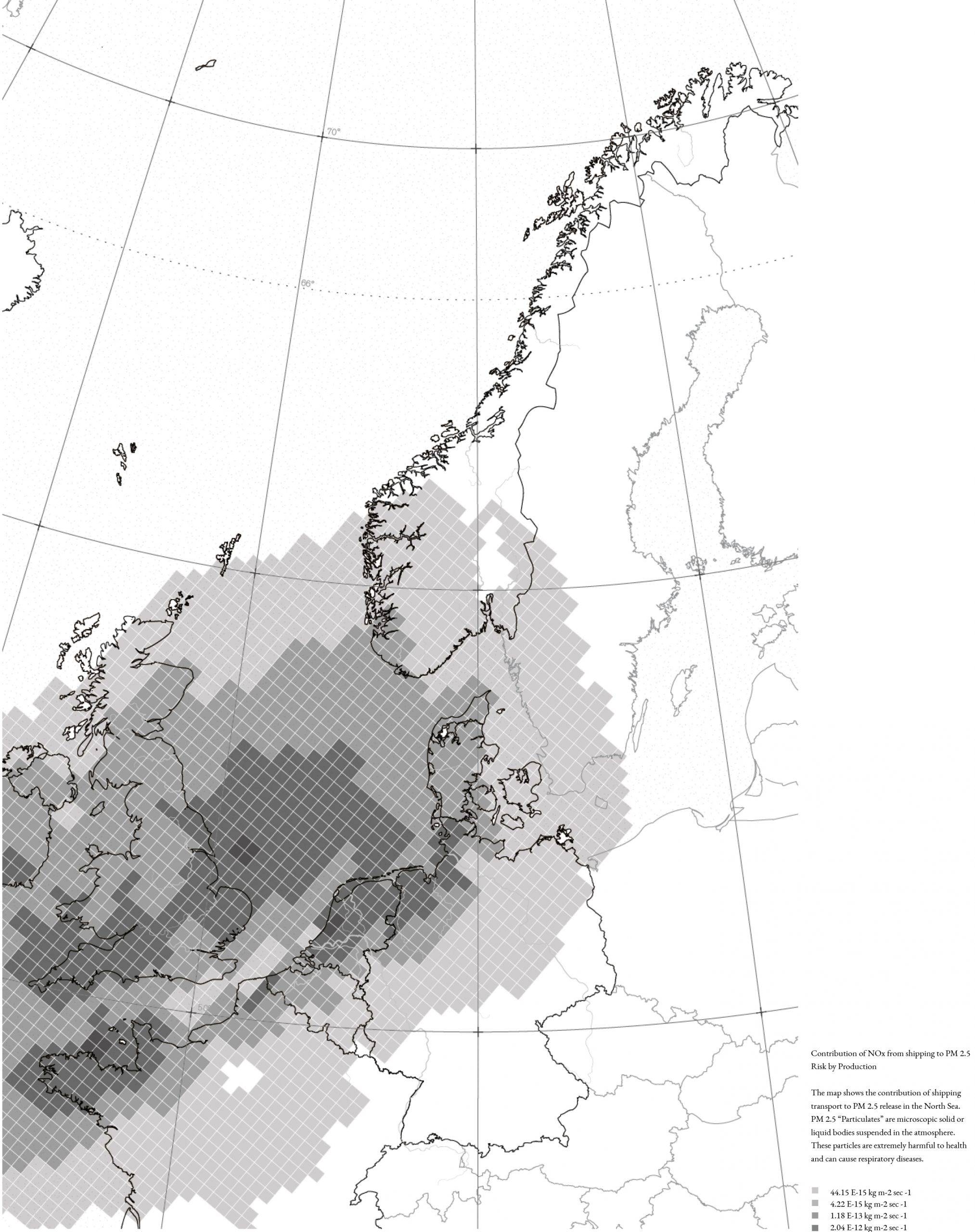 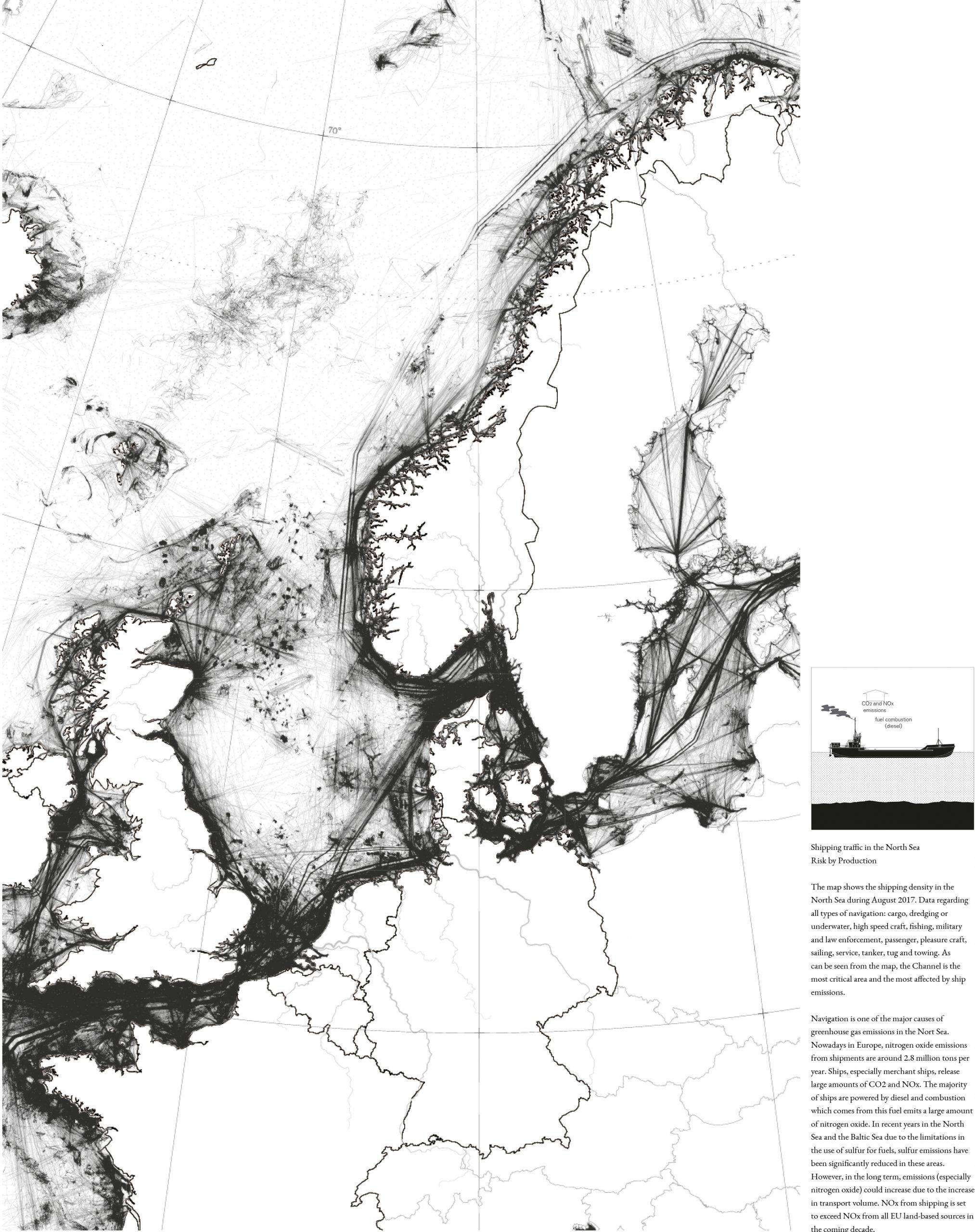 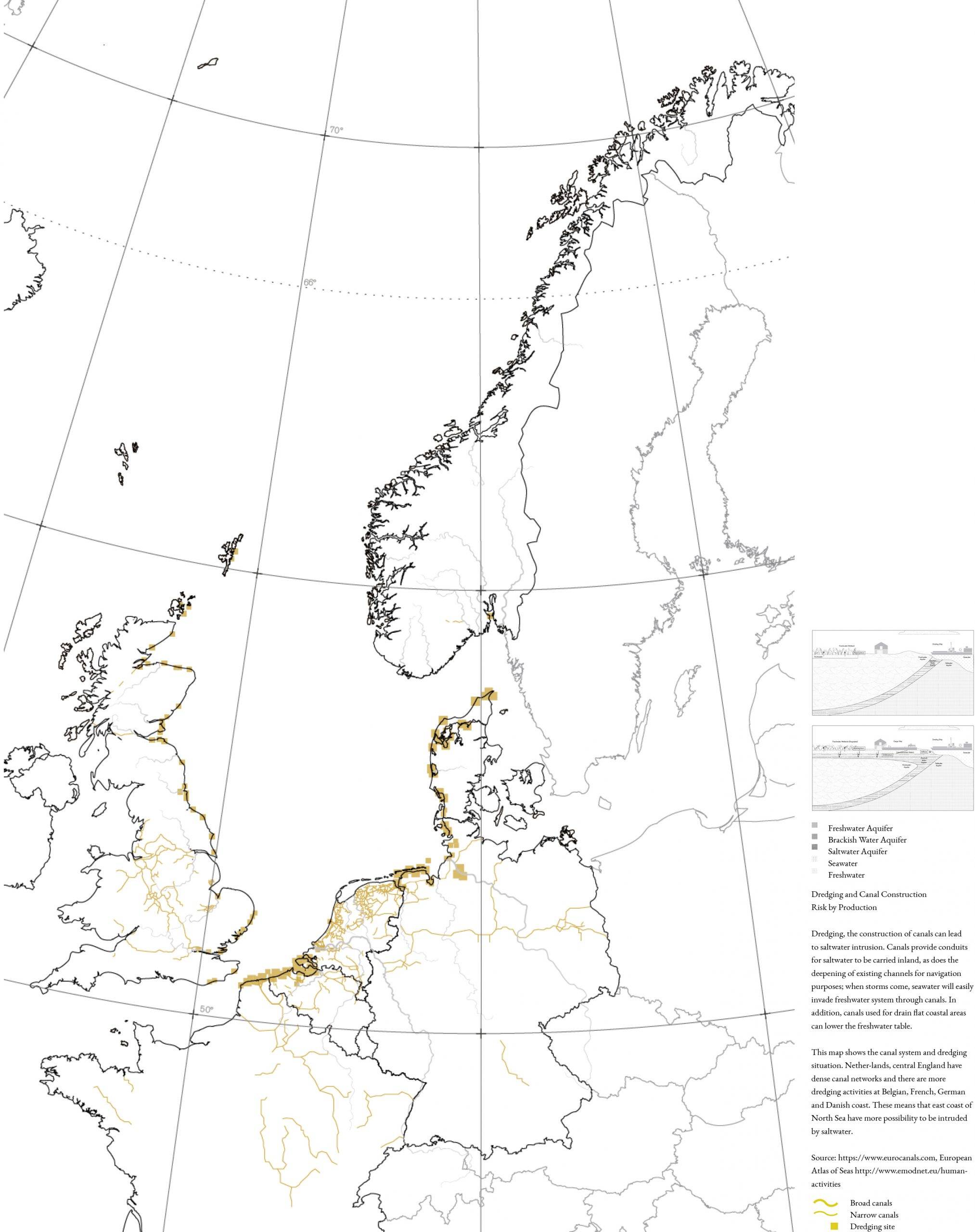 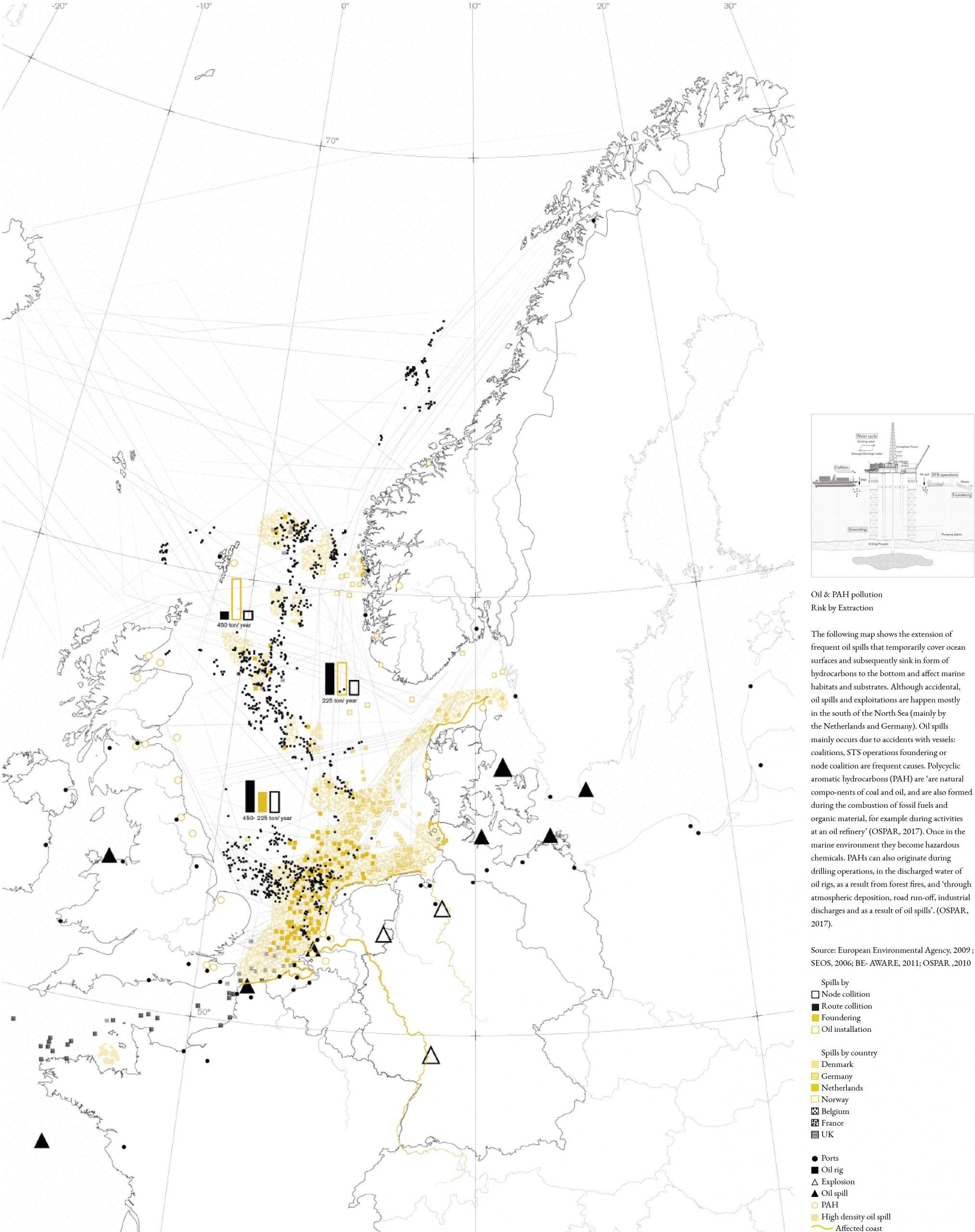 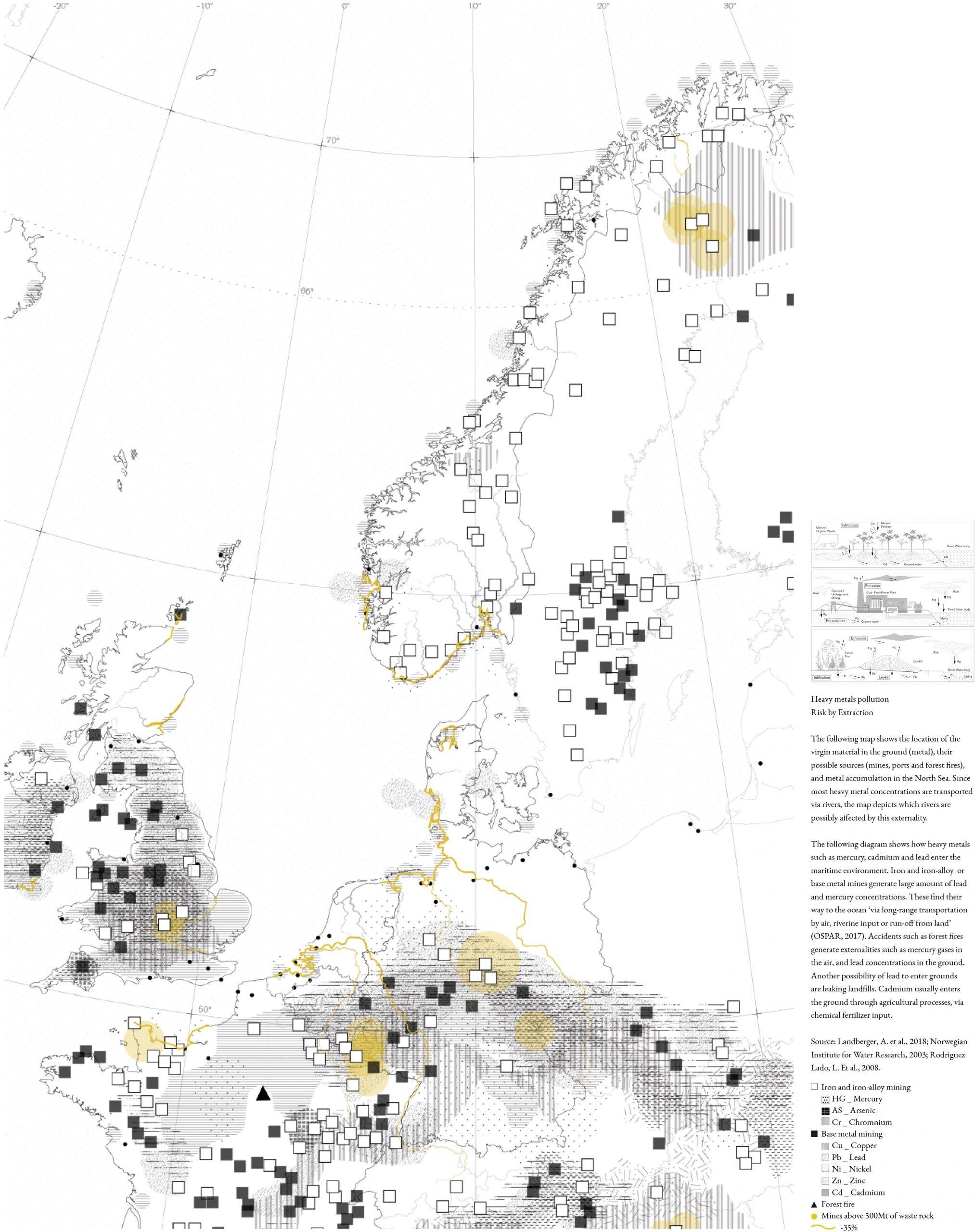 Our investigation starts from the drafting of a timeline (from the Paleolithic to the 21st century) that shows the events have shaped the current environmental, economic and social structures of the North Sea area. Starting from it we will further speculate on the future trends of these structures / systems in relation to the hazards deriving from anthropogenic and natural actions. Our investigation, therefore, seeks to define the impacts which hazards, of anthropogenic root (extreme extractivism, extreme production and extreme consumption) and natural root (extreme weather), will have on a complex system of economic and social environmental relations.

For each structure system (economic, social, environmental) we extrapolated/abstracted four different maps, where a different yellow intensity shows, through an overlapping of layers, the most exposed areas most to risks (sea level rise, wetland expansion , air pollution, water pollution etc …). Once the hazards map has been superimposed on the systems/structures map, such as the economic system, we will have a figure, albeit superficial, of how the risks will impact the system/structure under examination.

Different levels of urgency in the regions of Northern Europe is also extrapolated from this survey. Overall, we observe that the most industrialized areas and coastal areas have considerably higher “levels of urgency”. For this reason the aforementioned areas are to be considered “Urgent-Locations”.

Finally, we propose a projection on how hazards will influence and change our environmental, economic and social system. From the final map (shift map) it will be possible to notice how the habitats of several species will move northwards (due to the rise in temperatures) and towards the inland of the European continent
(due to the rise in sea levels and the consequent decline in soil quality). A similar change will also take place in the economic system, where activities strictly related to land use,such as farming and agriculture, will see a similar shift to the one mentioned above.

As in the previous systems, urban areas (social impact) will intensify more inland. Furthermore, vast urban areas such as Paris, Berlin and the Ruhr Area will experience unprecedented expansion and a significant demographic growth, to the detriment of coastal urban areas or adjacent to estuaries. 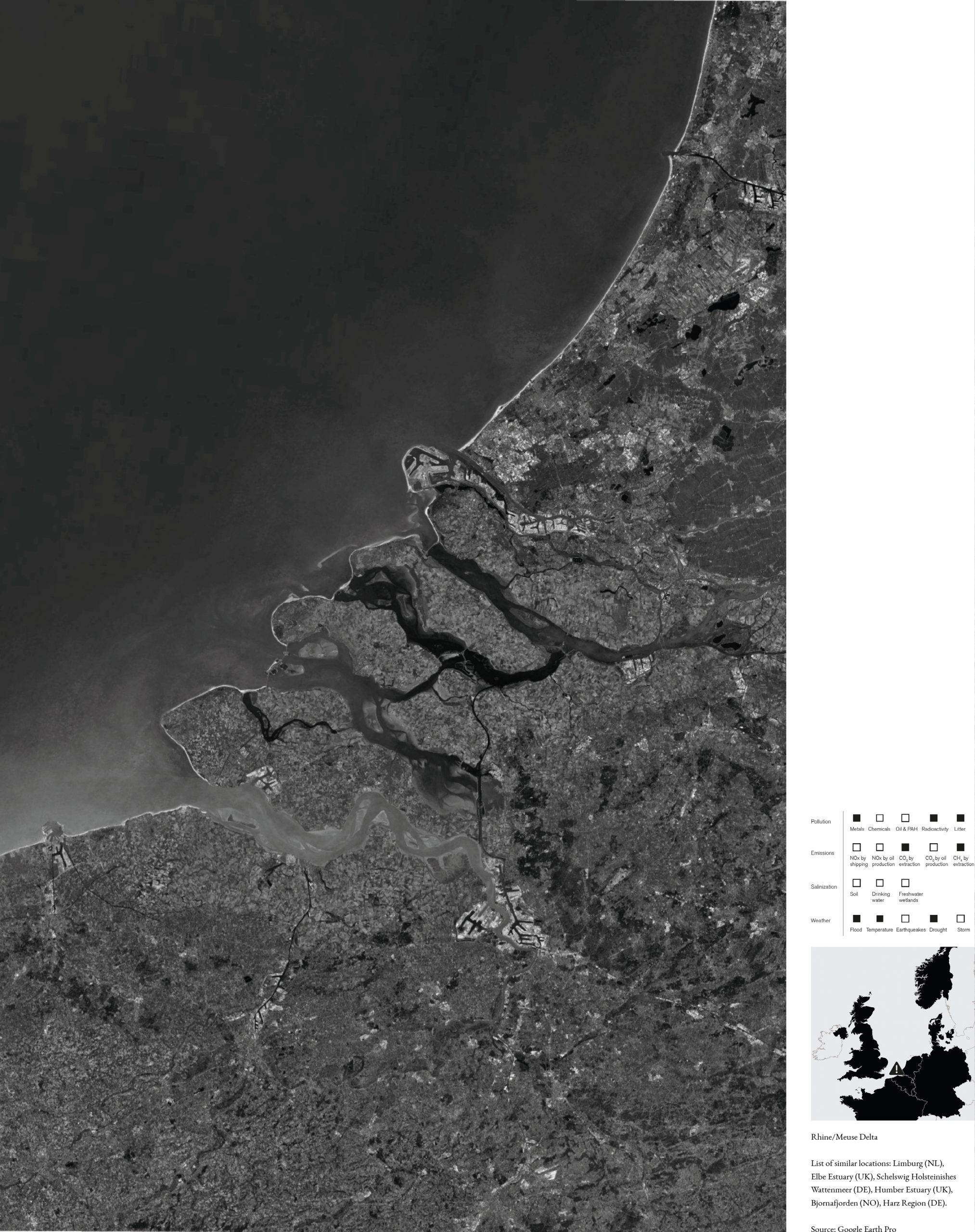 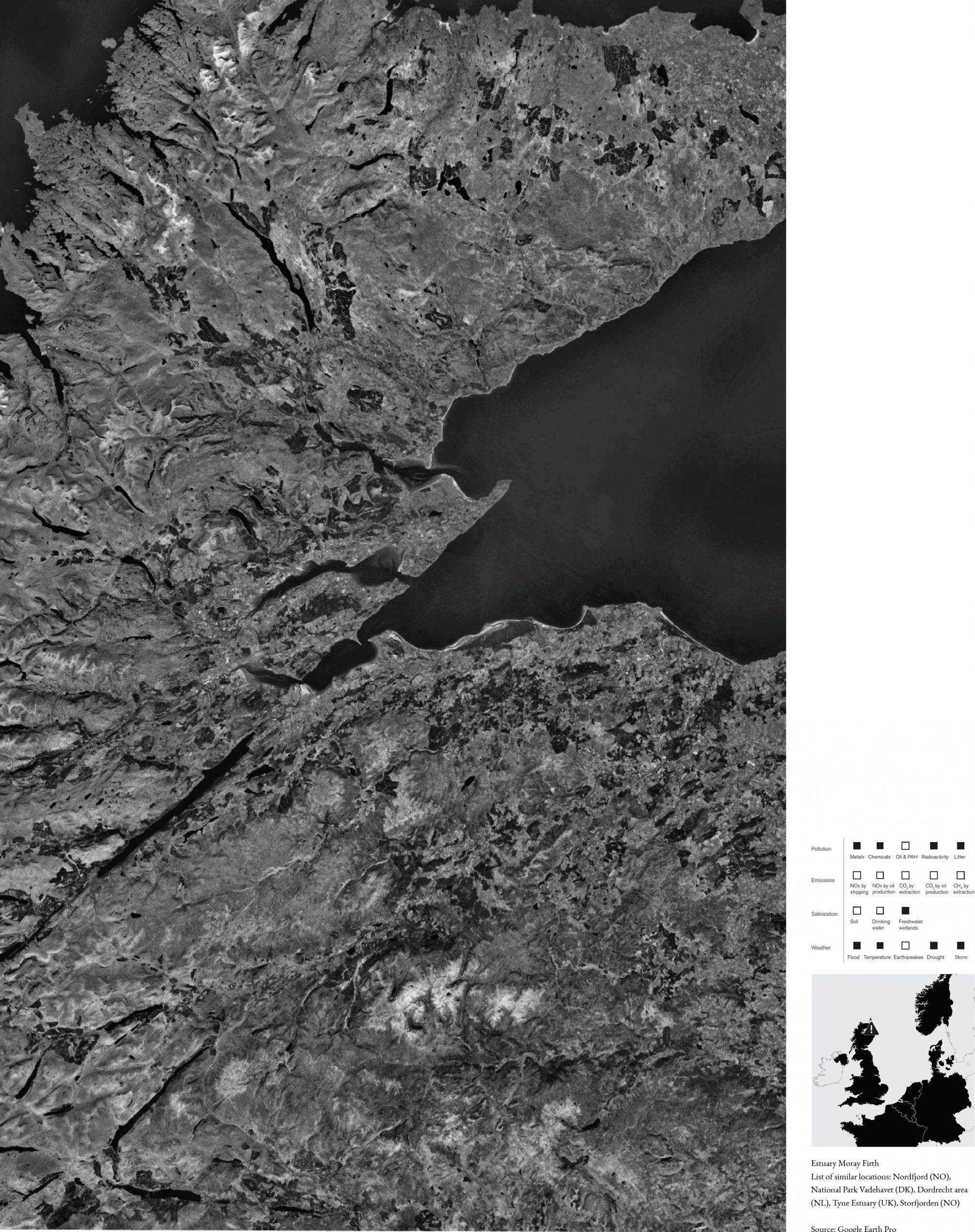 Based on the so-called “Shared Socioeconomic Pathways” (SSPs), under development by the IPCC and due to be published in 2021, a projection is here proposed for the North Sea region with regards to the trade-off of the externalities examined above. The analysis of the impacts of such externalities on the tangible reality, carried on by deconstructing the outcomes on social, economic and environmental spheres, simplified a more complex process in which all these reactions are connected and intertwined. Therefore, the focus of this chapter lies on the definition of possible and more heuristic scenarios, where the different management of emissions, salinization, pollution and the different forces of extreme weather have influence on societal choices and political decisions over the next century.

In particular, the following projection comprises four separate narratives as potential destinies for the North Sea augmented by the strict connection between climate change and socioeconomic development. These two variables provide a consistent set of conditions, in which cultural choices and political statements are shaped, and frame the matrix for the forecasted scenarios. Going from the left-hand part of the first following diagram to the right end, climate change is assumed to vary in intensity. A small variation of climate change refers to the RCP2.6 conditions, where emissions are contained and global mean temperature rise is up to +1°C. Moving gradually to the extreme circumstan-ces on the right-hand side of the matrix, intense climate change relates with the RCP8.5 scenario. Carbon emissions reach severe levels and global mean temperature rise is predicted at +4-+4.5°C. Together with that, the projection offers a systematic investigation on different levels of socioeconomic development, from a low change at the bottom, until a high variation on the top, where demographics and economics are expected to boost over current limits. In the two scenarios on the top, the economic growth is still perceived to be endless and unlimited, calling for great challenges for mitigation.

Moreover, a more general set of assumptions is provided in order to elaborate the impacts of the projected changes. Education, technological development, international trade and land regulation are considered to differ as consequences of the variables. In our view, these conditions strongly influence by – and influence, in turn – the political order of the given region.

With these essential correlations in mind, the following drawings document four future scenarios of the North Sea realising the theoretical assumptions on maps and images. At first, current trajectories of ex-ternalities are either exaggerated and increased or shrunk and lessened as assumed by the four possible schemes. A new cartography will be created. Finally, the four narratives are shown in a set of four line drawings, each one displaying a distorted image of the future North Sea. In these speculations, externalities and the consequent level of climate change are described in relation to political, cultural and economic phenomena. The complexity and the dual nature of externalities are here taken to the highest level of radical future. 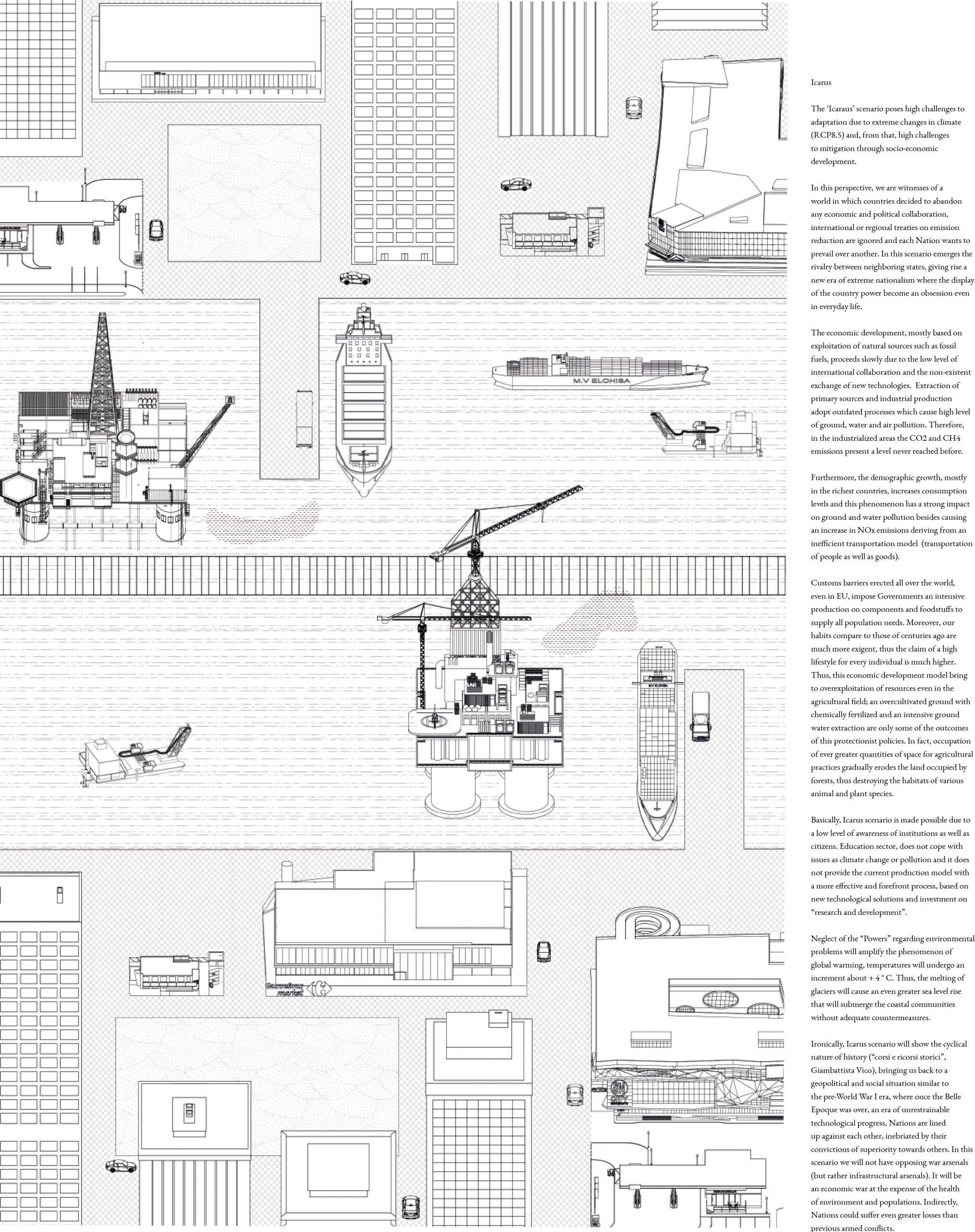 Jahnavi Bhatt – Beyond Cleansing: Transitioning Towards Socio-Ecological Resilience in the Ganges River Basin through an Adaptive Spatial Planning Model

Daniele Ceragno – Unveiling the Dichotomy: Geographies of production and romantic memories in the eastern Flemish coast

Jun Chen – Non-parasitic Economy: Towards a symbiosis between coastal cities and water

Binghui He – Adapt me for tomorrow: Towards a resilient The Hague in 2050 by re-defining collective space design

Alexander Scho – Make Food Great Again: A Prototype for how Architecture should respond to the 4th Agricultural Revolution, to take Action in its Acceptance in Society