The coastline, as we define it today, is a virtual line which position is defined by different temporalities – day, season, year, decade, century, millennia- in the dynamic interchange between sea and land. From a geological point of view, where climate change takes a cyclical role in the shaping of the territory (Lisiecki and Raymo, 2005), to a daily point of view, where low and high tide set the conditions of inhabitation to a wide range of species, the coast performs a multi-scalar dynamism humankind tends to ignore and fight against. In a culture of stability, permanence, and power, the showcasting of any hint of dynamism is a threat to combat: the trigger of a crisis.

The inquiry highlights an ecological and social crisis as a result of a ‘legacy of thought’ wherein the environment is objectified and reduced to human consumption (Boehnert, 2018). As a result of such positivist approach to ecology, a particular worldview has spread to our culture, cities and language. Based on this view, where nature is perceived as a “resource” (Boehnert, 2018), “hard” engineering approaches (such as dams, storm surge barriers and defensive coastal management) have been built to control the aforementioned land-sea interchange, hence reclaiming land for human consumption and setting the socio-economic conditions for a rich and thriving North Sea territory. The structures and systems that used to protect and build the North Sea economies, countries and cultures are, ironically, the ingredients for vulnerable grounds: large areas are currently suffering from soil subsidence (in the Netherlands) and higher rates of erosion (in the South-West of England) while others are threaten to suffer from even more severe land-loss, coastal and marine ecosystem services loss, and irreversible damage to the built environment and its inhabitants
(IPCC, 2019, p.4-8) in the not-so-far future.

Despite the notorious weaknesses of its method, the approach to overcome the future threats is based on the same protectionist philosophy. From Belgium, to Denmark, France, Germany, the Netherlands, Norway, Sweden and the UK, the strategies and policies have been developed with a similar perspectives, namely: “holding the line” to protect areas of high economic value; “retreating” populated communities with less voice; give more space to “ecosystem-based approaches” to the immediate buffer zone between land and sea. At the same time, large scale developments such as the 1 million homes assignment in the Netherlands (before 2030) ulteriorly pressure land uses, consequently questioning the feasibility of (new) urban developments in areas that are susceptible to the risk of erosion or floodings.

As long as increasing the protection from coastal hazards is not sufficient for guaranteeing the prosperity of coastal settlements (Quante & Colijn, 2016), our hypothesis stands for the urgency of rethinking the existing coastal protection strategies and policies, while considering the need and the possibility of a real adaptation to Climate Change: a vision that embraces the dynamic interchange between land and sea, and acknowledges instability and impermanence at the core of the future inhabitation/territorialisation (Raffestin, 2012) of the North Sea.

Firstly the agents and agencies shaping the land/water interchange were explored as a means to create an index for the inquiry. Secondly main typologies were defined based on the different land/water inter-change and related forces, namely the fjord, delta and cliff. The typologies were deconstructed based on the specific agents and agencies and the specific anthropogenic challenges that are posed for the (build) environment related to those forces.

The evolution of the interchange of the North Sea territory is mapped from the Last Glacius Maximus (maximum ice coverage) onwards, as a means to show the dynamics of the territory in a geological time frame. This is followed by a separate exploration of agents and agencies, namely:
River discharge and dispersal of sediments
Sea currents and distribution of sediments on the seabed
Air temperature + surface (sea/land) temperature – wind patterns + storm surges (in summer and winter) Gravitation forces and tidal movements
Anthropogenic infrastructures and systems – land exploitation / water defence / human defence 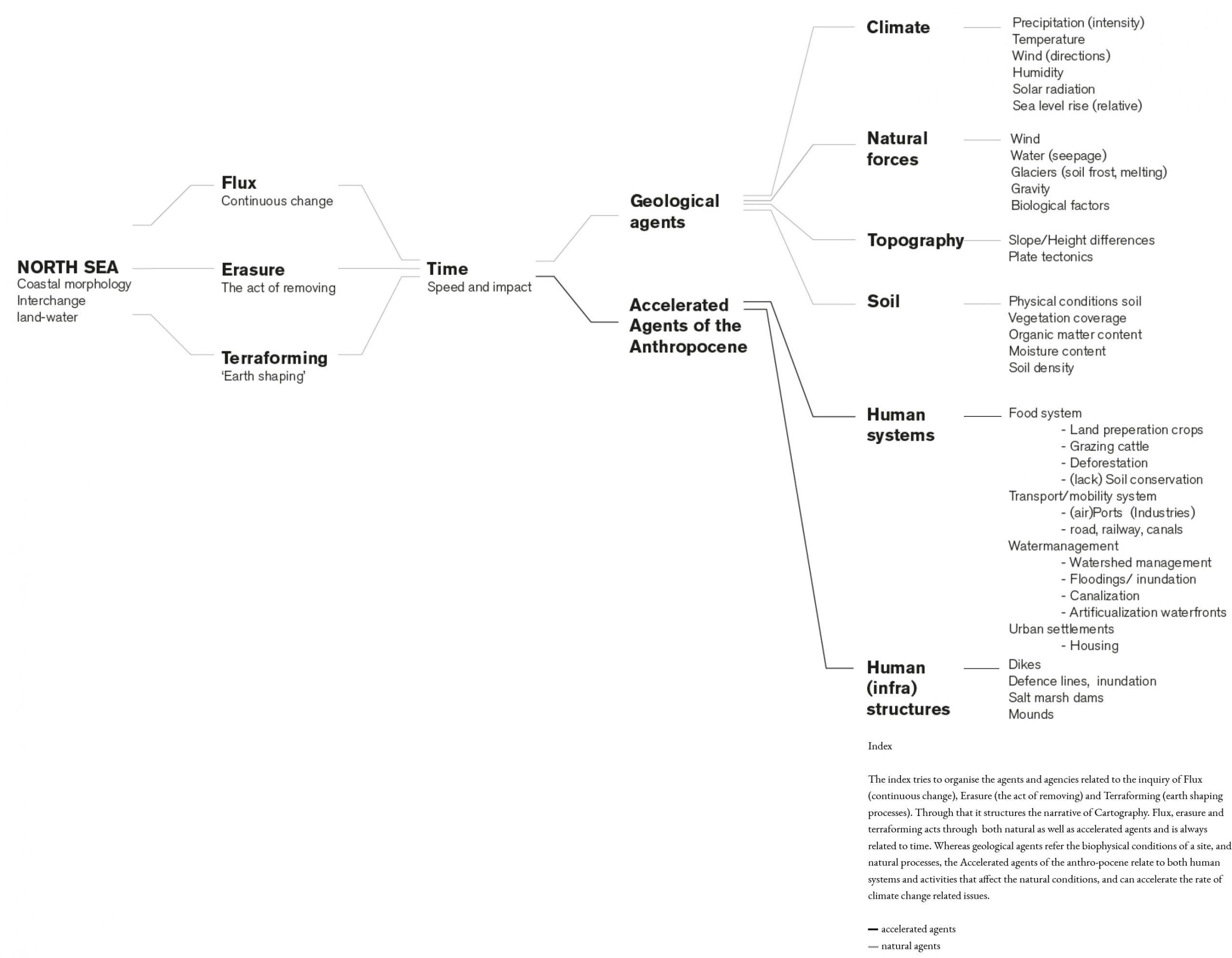 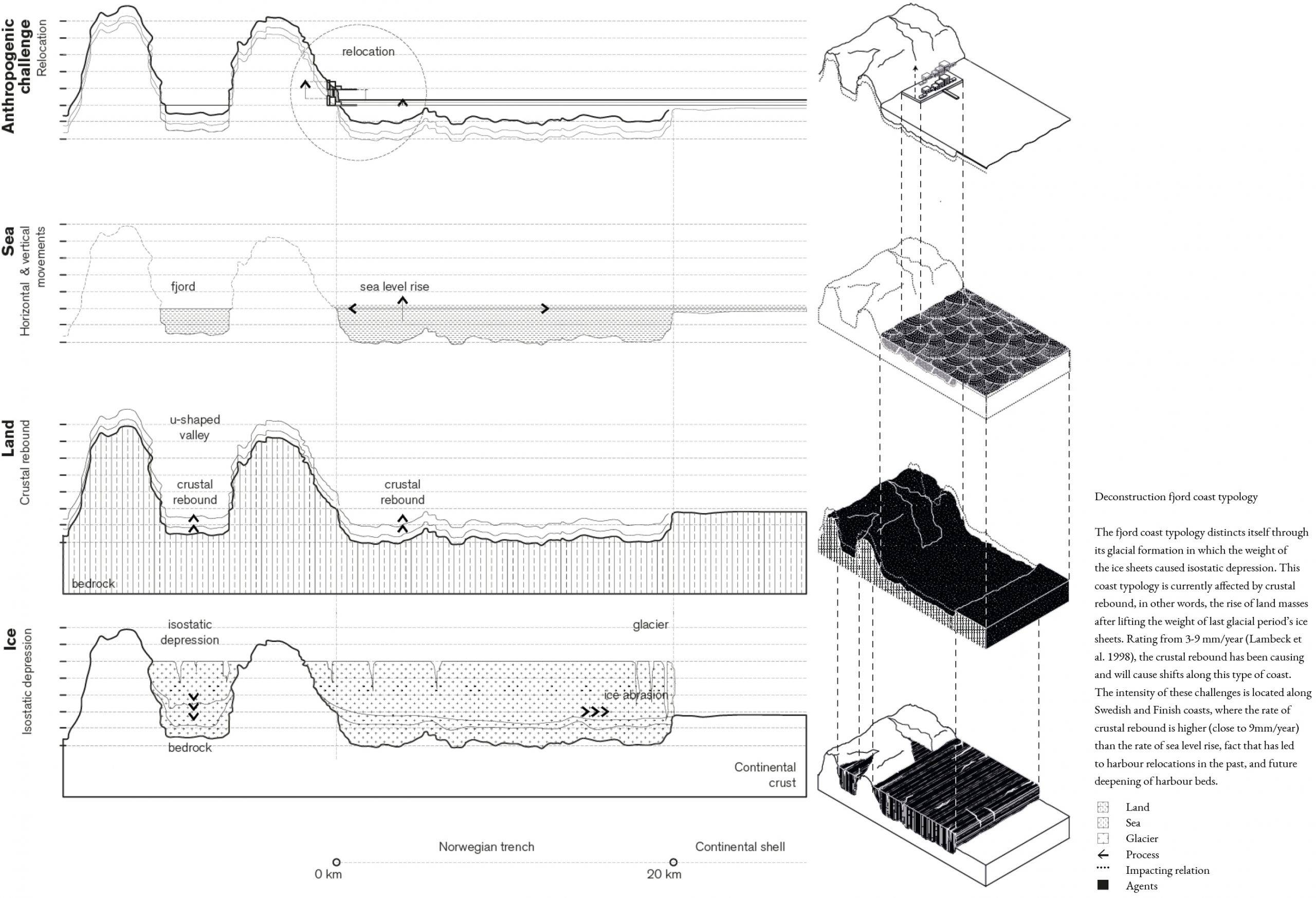 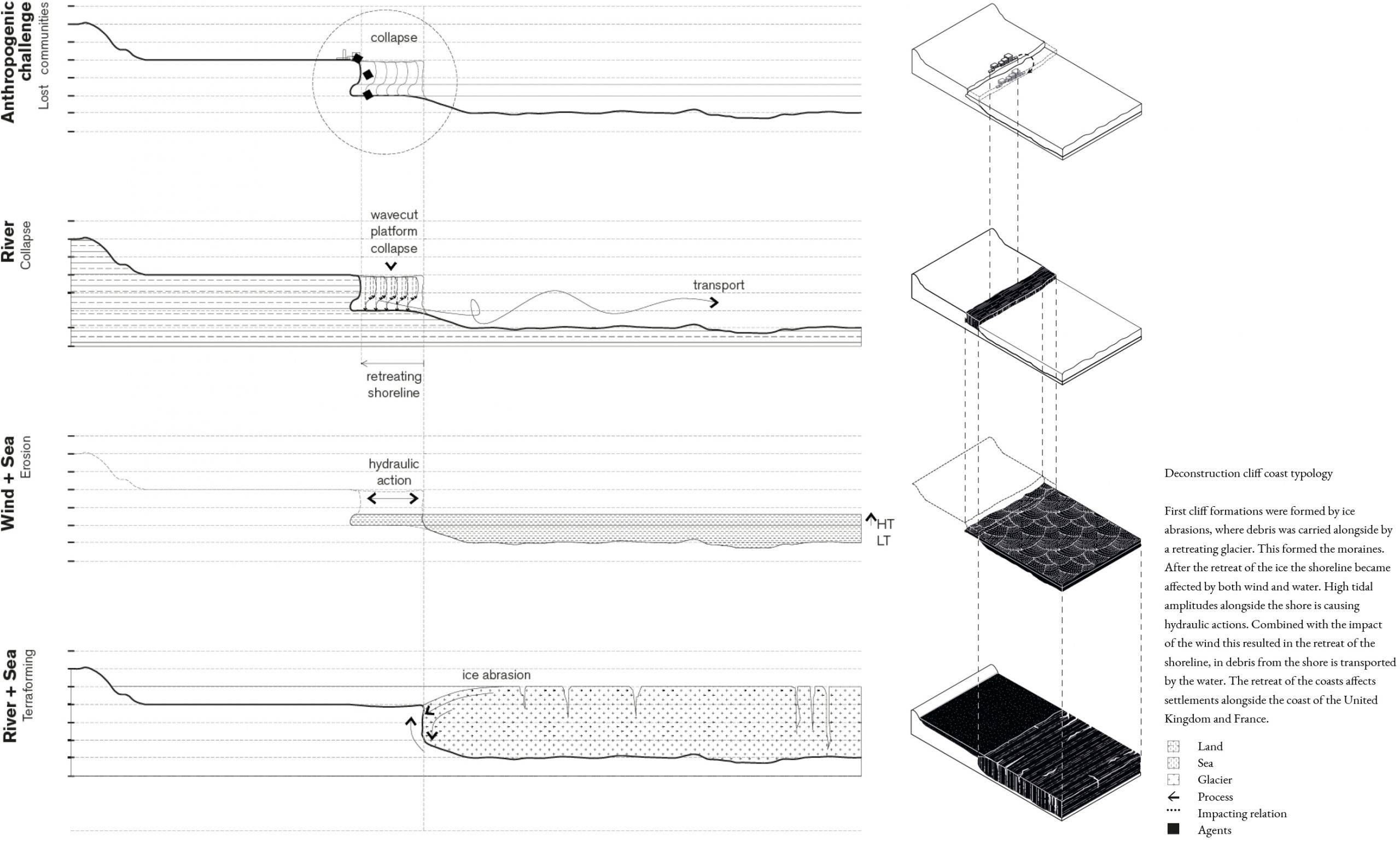 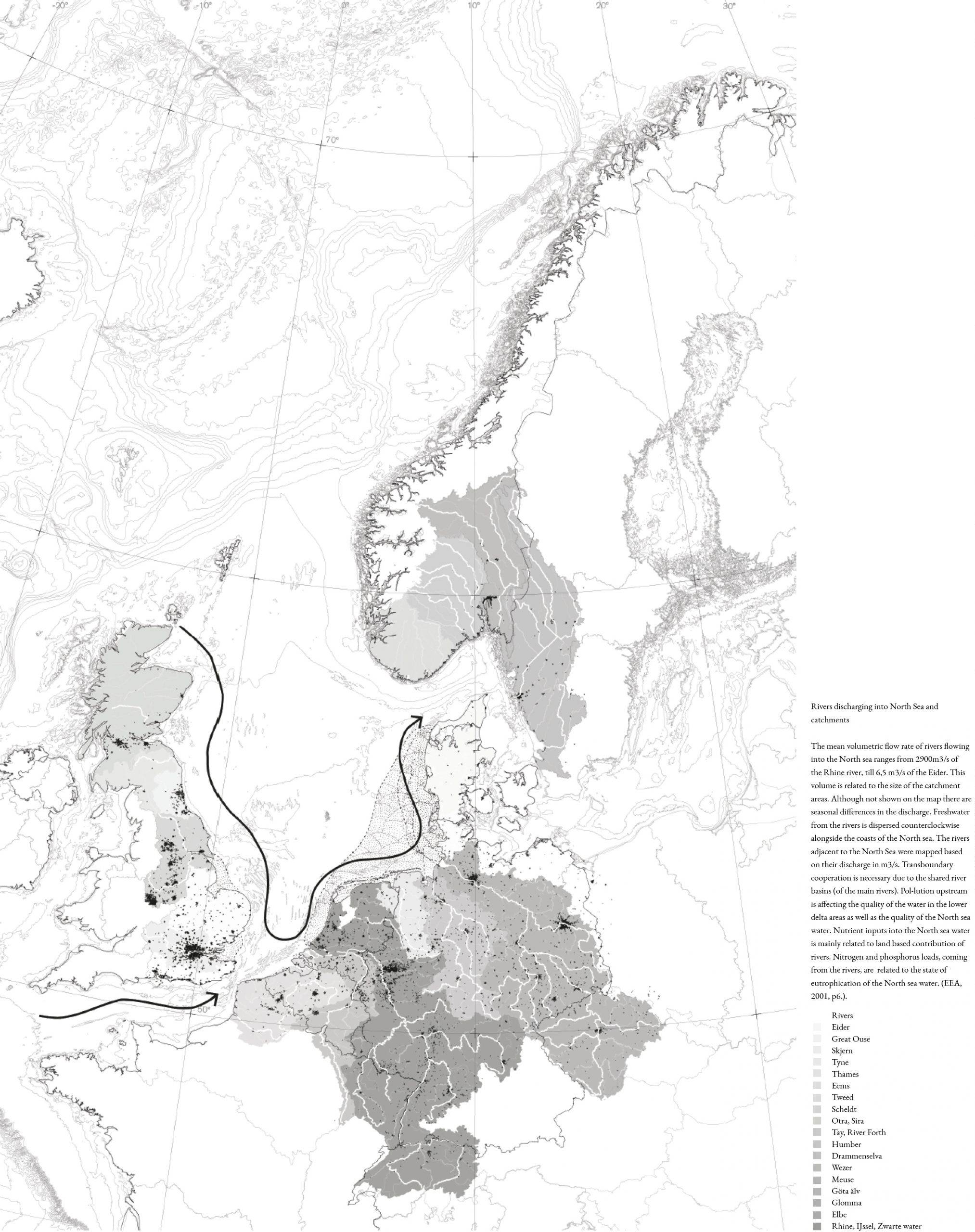 The objective of the deconstruction phase is summarising the extensive outcomes of the ‘Cartography’ pha-se in order to provide a general framework for action. This synthesis is done through the overlap of different systems analysed in the previous phase and through the elaboration of concise maps for pointing out the most relevant urgencies, namely erosion, flood, crust rebound.

The elaboration of a spatio-temporal intensity diagram was fundamental to highlighting the paces of obser-ved and expected change. The intention of the timeline is to observe and represent how the aspect of time influences pressures and relations between objects/ subjects/ flows (e.g. sea level rise affects subsurface /capital affects infrastructure).

The preceding steps bring us to project actions not on an individual scale but where the line of inquiry appears most relevant or in other words this phase made us defining what are the potentials and the con-straints related to the land-water interchange for future action in space (location) and time. 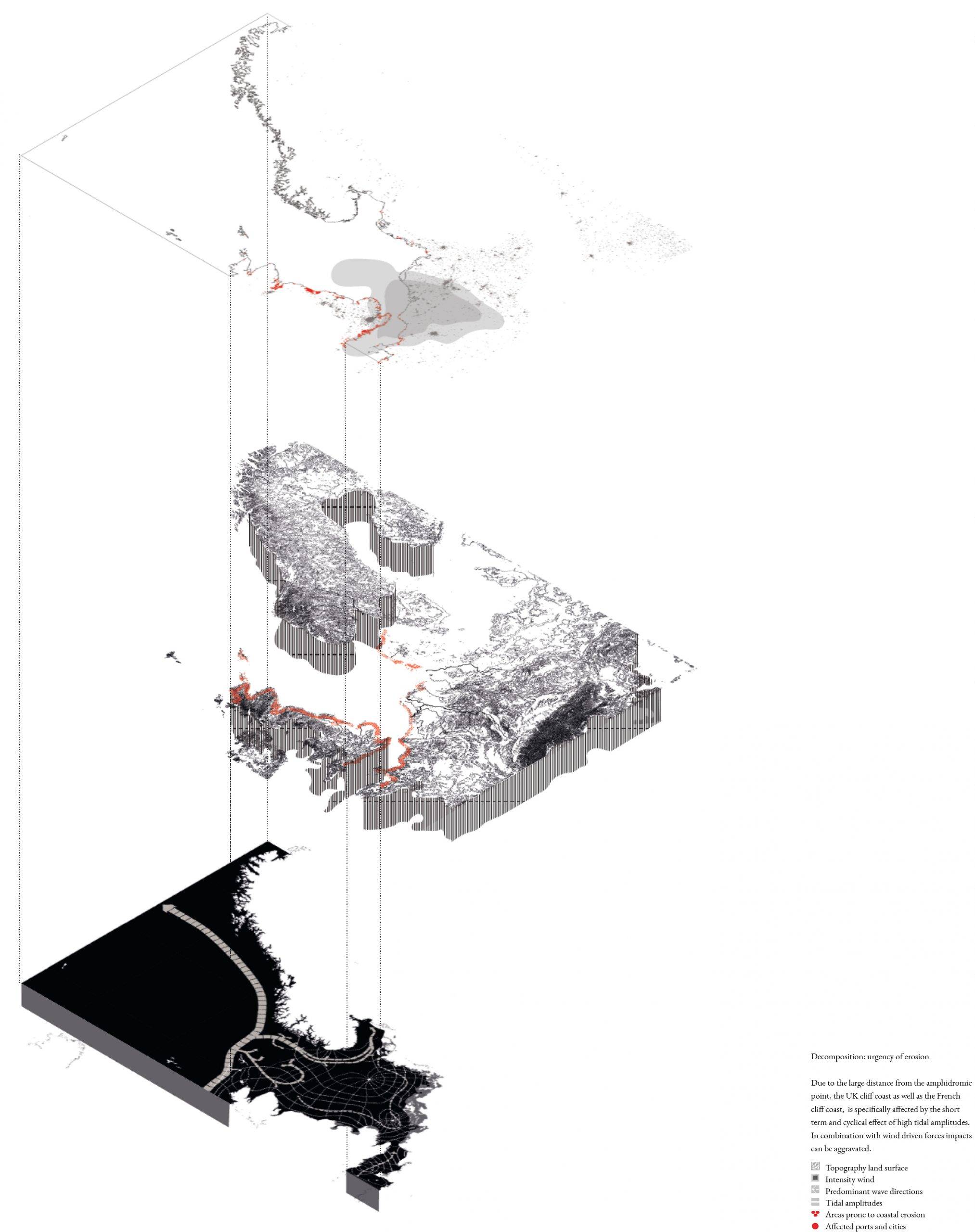 The objective of the projection phase is to translate the conclusive narrative stated in the deconstruction phase into a spatial vision, and later to ‘stress’ the vision according to four different scenarios of possible futures, while answering the question, “what is the design space that unfolds?”.

The vision proposes a progressive adaptation to future coastal phenomena (flood and erosion) composed by adaptive cities, partial relocation, hosting cities, inhabited marshland and ecosystem restoration. It is also related to socio-economic themes, such as water management, food supply, the physical appearance of urban settlements their and relationship with its dynamic surrounding. 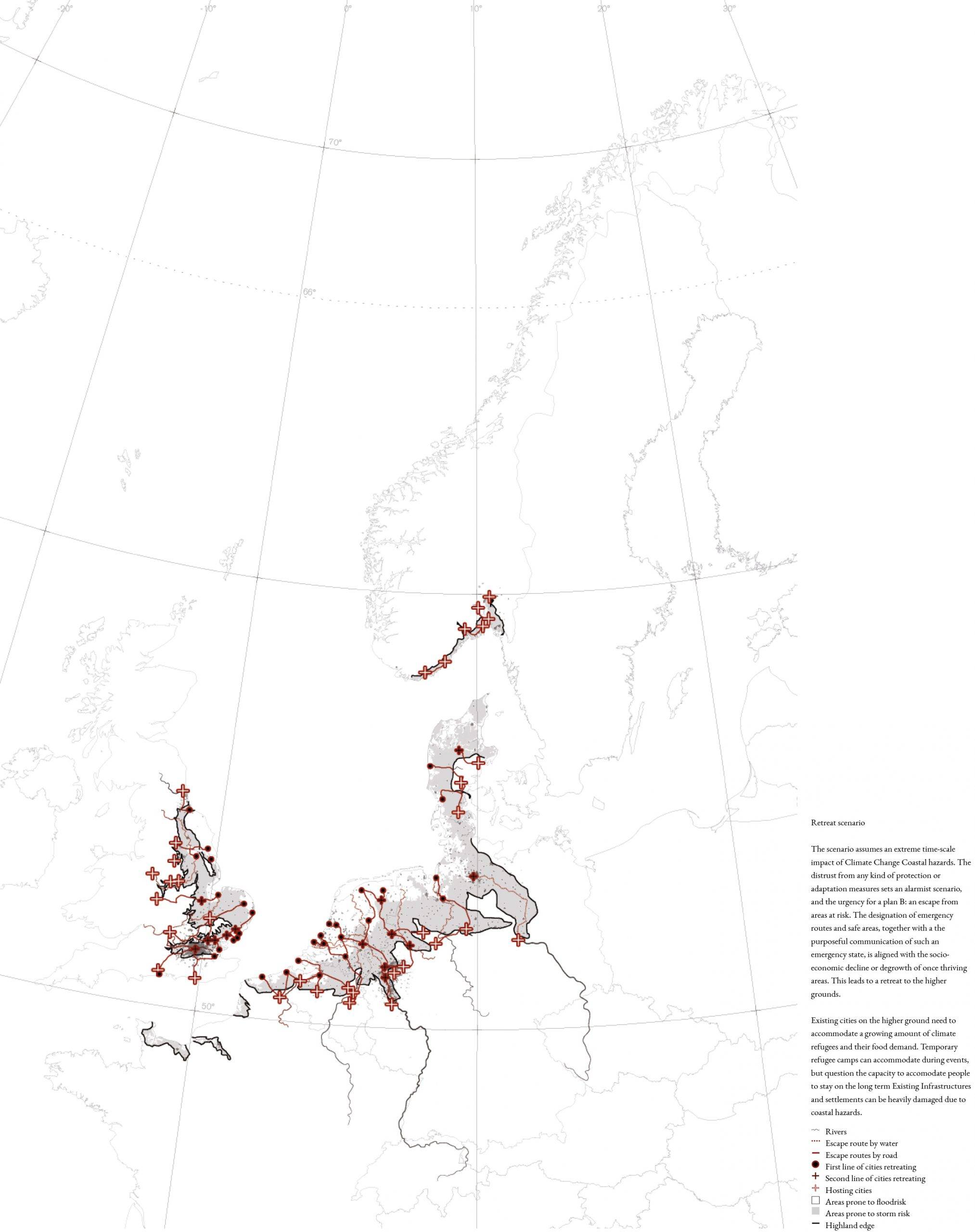 Luca Parlangeli – Remnants of a Forsaken Past