The North Sea has been for centuries the place where cultural exchange, free flow of people, trade and innovation took place, leading to the transformation of the Europe. It was a common ground that bounded territories together, yet encouraging their own identity to develop (Pye. M 2015) . Nevertheless, today the North Sea is not perceived as this place of exchange, but rather as a source of income and resources. This have led to its eventual territorialization. What once was a borderless space that promoted interrelations, now has borders, laws and restrictions. Furthermore, this territorialization has triggered both hopes and havocs depending on the perspective.

As a remain from history’s lessons, trade and free flow of people among the North Sea have encouraged nations to work together, aim towards a high, holistic level of representation. Where every nation could be benefited yet maintaining their sovereignty over their territory. The Single Market, Customs Union, European union, are some of the efforts of nations to work together and to connect with other cultures. Nevertheless, this aims have become a double edge sword, because the territorialization or sovereignty over land and sea conflict with the vision of cooperation and identity of organizations like the EU. Within the globalized world, the aims towards a supranational representation triggers a polarized perception on identity. Today nations are more prone to be equally divided between nationalism and unity. This dissonance is evident in the diffe-rent scales, from the continental macro scale, to the local Nano scale.

Hence, even if supranational representation is high when it comes to economy and governance, the territory and people are being overlooked, hence not represented. The project of the territorialization of the North Sea encourages cooperation to feed the interests of nations, yet not of the people. Reason why nationalism and claims for economic and social independence are on the rise. For example, the United Kigdom ne-glecting the common history that bounds the region together and threatening the few efforts for unity with Brexit. The crisis is evident in the different layers of representation that are intertwined yet conflicting with each other; efforts for unity trigger autonomy claims, putting in evidence the lack of representation in the regional and local scale, but simultaneously this small scale autonomy claims have the strength to threaten the unity so far achieved.

Acknowledging the importance of the natural and cultural heritage as what have connected Europe yet made it different and unique, a new non obstructive cooperation between nations need to be considered. Hence, it is necessary to have a new multi scalar reciprocal approach to these different layers of repre-sentation. The European representation needs to be more inclusive with the peoples in the territories, transcending national borders, by creating a better interaction between them in the policy and decision making of the region. (Bellamy. R, Castiglione. D, 2013). Within the contradictions and conflicts between local, national and regional policy making, the new way of representation should give more freedom and equal importance to the individual groups of people (local). This is described as a shift from ‘democracy’, rule of the people, to ‘demoi – cracy’, rule of the peoples. (Nicolaidis 2003). Therefore, promoting a local and regional reciprocity and where local representation has a say and its policy making and effect in the macro scale, and vice versa.

By definition, ‘Crisis of representation’ refers to a turning point when difficult or important decisions must be made (crisis) regarding that who speaks on behalf of something, or what people feel represented by. The identification of such crisis refers particularly to the conflicting issues within the same reality, stressing the manner in which people, countries and the territory as a whole feel represented and the urgent changes to be made. Acknowledging the fact that the crisis of representation is intertwined with every aspect of life, the cartographic phase classifies it in four different categories; territory, economy, governance and anthro-pogenic. These categories are analyzed through the mapping of political borders and cultural heritage in different scales, where different assemblages and dissonances are evident. While everything is related, the research aims to identify a crisis within each specific line of inquiry, each one with its own urgencies and potentials.

While human kind has its first claim on a common heritage and the natural environment under the jurisdicti-on of their own states, the initial approach to this crisis is also on the territory because of the common risks, hazards and environments worth of care are having different levels of representation and management.

These common efforts and individualistic interests are also related to the economic crisis of representa-tion. Although the historical tendency of territories to get benefited from the North Sea has led towards a regional trading relation today, the individualistic interest that has led to the diachronic territorialization of land and sea has reached a crisis point where traditional cooperation within territories has shifted towards an isolated extractivist claims on the sea.

As for Governance, the crisis stresses the conflicting reality triggered by globalization. The contrast lies be-tween central and local governance, cities and rural areas and its further effect on territorial policy making, the people and its identity.

In relation with identity, the Anthropogenic line of inquiry focuses on the effects on the population of the dif-ferent layers of representation. Although the intangible anthropogenic borders (traditions, minorities, flows) seem blurred and thus assembling, there is a latent crisis of representation between the different scales of decision making, increasing the contradiction between community and the individual. 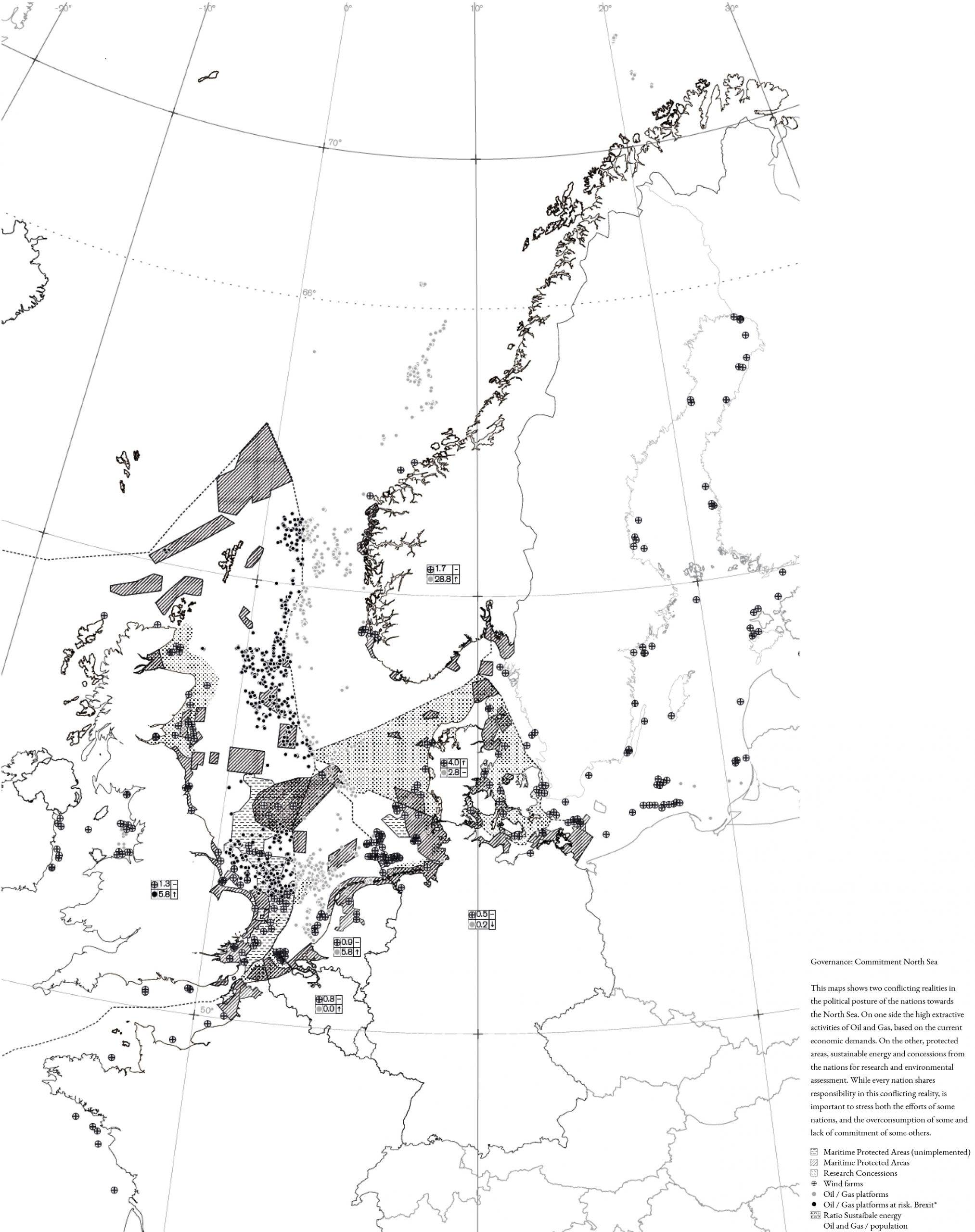 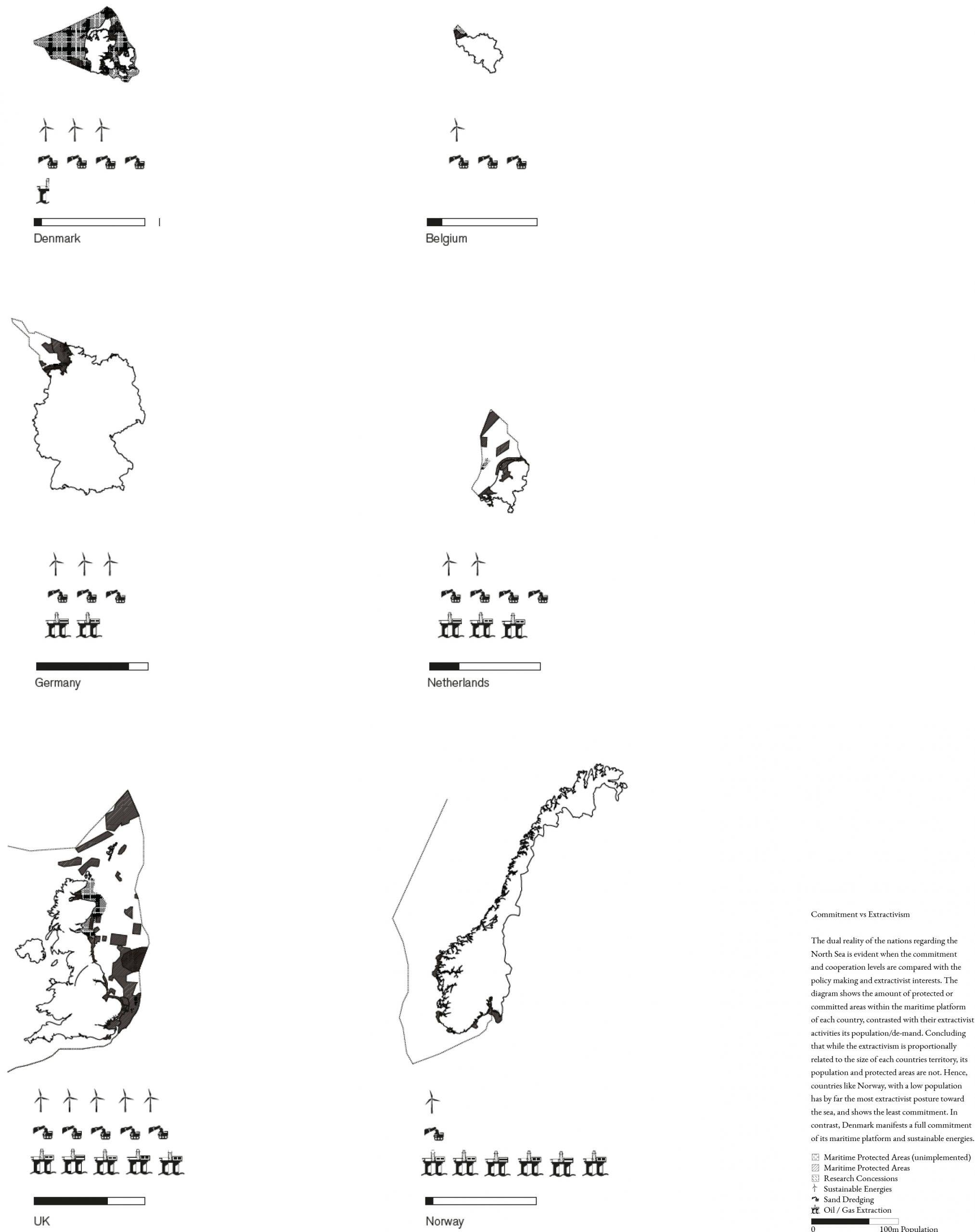 The individual notions of Territory, Economy, Governance and Anthropogenic have led to various insights in the cartography phase. The following phase, deconstruction, further elaborates on these insights by the means of maps, diagrams and project actions, all specified to one of the four notions. However, all relating to crises and levels of representation. The four notions are addressed individually, nonetheless together they collaborate to explain the crisis of representation through scales, times and locations.

Firstly the conclusion maps following from the previous phase show a relation to earlier mentioned aspects, however apply an additional level of interpretation and information. The maps define several zones of crisis emerged from research relating to their individual notion.

The crisis points that have emerged from the research have been listed and are related to the notions to result in project actions. These project actions are studied through different times and scales to predict future situations and possibilities.

In the deconstruction phase the different crises and project actions where identified within the four categories of territory, governance, economics and anthropogenic. Nevertheless, to project a vision for the futureof the region it was necessary to overlap the previously mapped crises into an action – reaction manifesto in order to have a wider understanding on the overall crisis of representation. By doing this different potentials and problematics in different scales and categories where identified and used to project the ideal vision of North Sea representational scenario. The potentials in the local scale, its strong local policy and sense of identity, together with the efforts for governmental unity, free trade agreements and free movement of people suggest a hopeful scenario for a well-represented and cooperative Europe.

Nonetheless, it is essential to consider different scenarios based on the problematics that keep arising in today’s geopolitical scenario. With Brexit as an example of the unexpected in what was considered to be a stable region, the projection phase aims to push the boundaries of the expected scenarios, from ideal to almost dystopian. These scenarios are the result of a matrix, showing the frightening fine line that divides the most hopeful scenarios of cooperation from the havocs of singularity and isolation.

For the crisis of representation, the four provocative future scenarios are placed in the intersection between cooperation and representation; isolation, civility, singularity, solidarity. This projection further reveals that, unlike the current common believe neither high representation and identity or high cooperation promise a bright future for the territory if they don’t work together and are reciprocal to each other.

Stefano Agliati – From Landscape to Landscape: Multifunctional adaptation strategies for the Scheldt estuary

Gioele Colombo – Gizmo: The Theatre of Automation in the post-labour society of Hammerfest

Binghui He – Adapt me for tomorrow: Towards a resilient The Hague in 2050 by re-defining collective space design