“(…)what are we really after? A capitalism adapted to ecological constraints (and vice versa); or a social, economic, and cultural revolution that abolishes the constraints of capitalism and, in so doing, establishes a new relationship between the individual and society and between people and nature? Reform or revolution?” (Gorz, 1980, p.4)

This quote stresses the extremes of social, economic and environmental developments driven by our current global society. Even though we are nowhere near either of these extremes, since the 1980s we observe changing way of urban restructuring closely connected to the global goal of everlasting wish for growth of productive capacity and the generation of capital (Brenner & Schmid, 2015).

One can recognise a trend of implementation of neo-liberal structures such as privatisation and deregulation within vital economic sectors resulting in multiple impacts on all spatial scales of urbanisation. Continuous economic growth creating capital, enabled by constant upscaling and improved efficiency of processes along the entire value chain in all sectors.

The cartography exposed an uneven spatial development, where growing and explosive urbanization processes go hand in hand with stagnation and shrinkage on local, regional, and global scales (Brenner & Schmid, 2015). Centres of economic power shift into patterns of inter-metropolitan networks and nodes, which are strongly relying on large scale infrastructures to secure their economic resilience and therefore their importance within the regional and global system.

However, not only urban areas, defined by population and the built environment but also their hinterlands as well as former unurbanized areas, in our case the North Sea, meta-morph into territorialised spaces and operational landscapes to facilitate our demand for resources. The extraction and transformation of common goods into commodities satisfy the idea of the generation of capital, changing the social and environmental structure often persistent in these areas by prioritizing economic growth over societal and ecological issues (Brenner, 2016; Geldof & Janssens, 2014).

It seems that the overall importance about the marine economy is irrelevant, expressed in numbers of added value to the economy and overall employment. Nonetheless especially the chain of oil and gas can be seen as the most essential driver behind our contemporary wealth and societal patterns. The short-term dominance of oil & gas is unquestionable, but in the long term there will be (at least a partial) shift towards other undiscovered, intangible, or already known resources. However, the actual marine activities form generally only a start of the value chain that incorporates the entire capital process. Looking at the entire value chain, it is essential to investigate the system created around the resource. Thus we researched the significance of the ports and related activities as the liminal zone connecting the operational landscape of the North Sea with the economic centres based on land as well. The issues with our current system become apparent when we experience an unexpected change within a value chain or for an entire value chain. This is especially visible in the oil & gas sector due to projected environmental changes and by geopolitical powers that the industry and stakeholders did not take into account before.

In contrast with the fluctuating character of the profit-driven economy and the resulting spatial ex- and implosions of urbanised areas conflict with the static character of many value chains, which brings problems within a transitioning society. This is demonstrated by shrinking demand for fossil resources, volatile resource trade markets, geopolitical forces, and continuous regulations, resulting in decommissioning of obsolescent installations along the value chain or shifting of production/processing to new locations. In many cases it´s not financially feasible to pay for the removal or clean-up of decommissioned locations, and since they are operated by profit-driven organisations they just leave them be.

For the commodity of sand and aggregates, it is evident that neither the projections of marine extractions meet the demand nor do they sustain a biodiverse marine environment. Even if the European use of aggregates in construction is stable and export numbers do not show the need for supplying a global urging for sand extracted from the North Sea yet, the rapidly accelerating worldwide demand leaves uncertainties. The projected demand of the Netherlands in maintenance dredging is as high that even twice the current national mining would not meet the demand. Both phenomena showcase an urgency to rethink land reclamation and construction since the demand will sooner or later eventually be unable to be met.

Lastly, contemporary ports and their logistic-distribution networks cannot react to the fluctuating character of transport routes on the sea and the emergence of new territories of economic importance, making them vulnerable for changes within the system. This results in sustaining dependency on unsustainable adaptations in port-city interfaces.

This demonstrates that a high level of flexibility within these resource chains is quintessential for a vital economic port system. In case flexibility within a chain is not easily achievable, one should research ways to intertwine different value and/ supply chains to make them multifunctional. This ensures continuity of the network and all the other factors that are linked to it, such as job security, spatial and environmental changes, and societal structures. As a conclusion and to reflect on the findings, Brenner´s (2016) statement points out a way of rethinking our ethical and prospective positioning towards commons and capital in future societies.

“At minimum, they raise doubts about any approach that aspires to create fortified retreats or privatised enclaves (…) “Instead, they underscore the challenge of establishing politically negotiated, democratically coordinated, environmentally sane and socially meaningful modes of connectivity between the various places, regions, territories, and ecologies upon which humans collectively depend for our common planetary life.”.

To start with the catalogue we would like to define the following notions for better understanding and a common foundation to built up on.

Commodity: A commodity is a product/resource which is produced or extracted for the sale on a market, eg. for exchange. There are two differentiations between their use/value.

Qualitative Use-Value: This describes the commodities physical condition. The value is independent from labour, which is required. The sheer way of using a commodity for different reasons/activities is evaluated.

Quantitative Use-Value: This describes the exchange value of a certain commodity, which means it can
be compared with the value/quantity of other commodities. Here an exchange between two commodities happens, when both have the same exchange value.

The catalogue chapter is focusing on the display of the different oceanic economies and their contribution to national economies. Further the research focuses on the rather traditional capitals, namely gas, oil and maritime aggregates. The focus was picked due to its contribution to the status quo of the industrialisation and thereby its spatial impact on the North Sea. Furthermore a fascination for the systems behind the infra-structures and the individual influence of each system component on other elements in the system or entire system, also contributed to this decision. 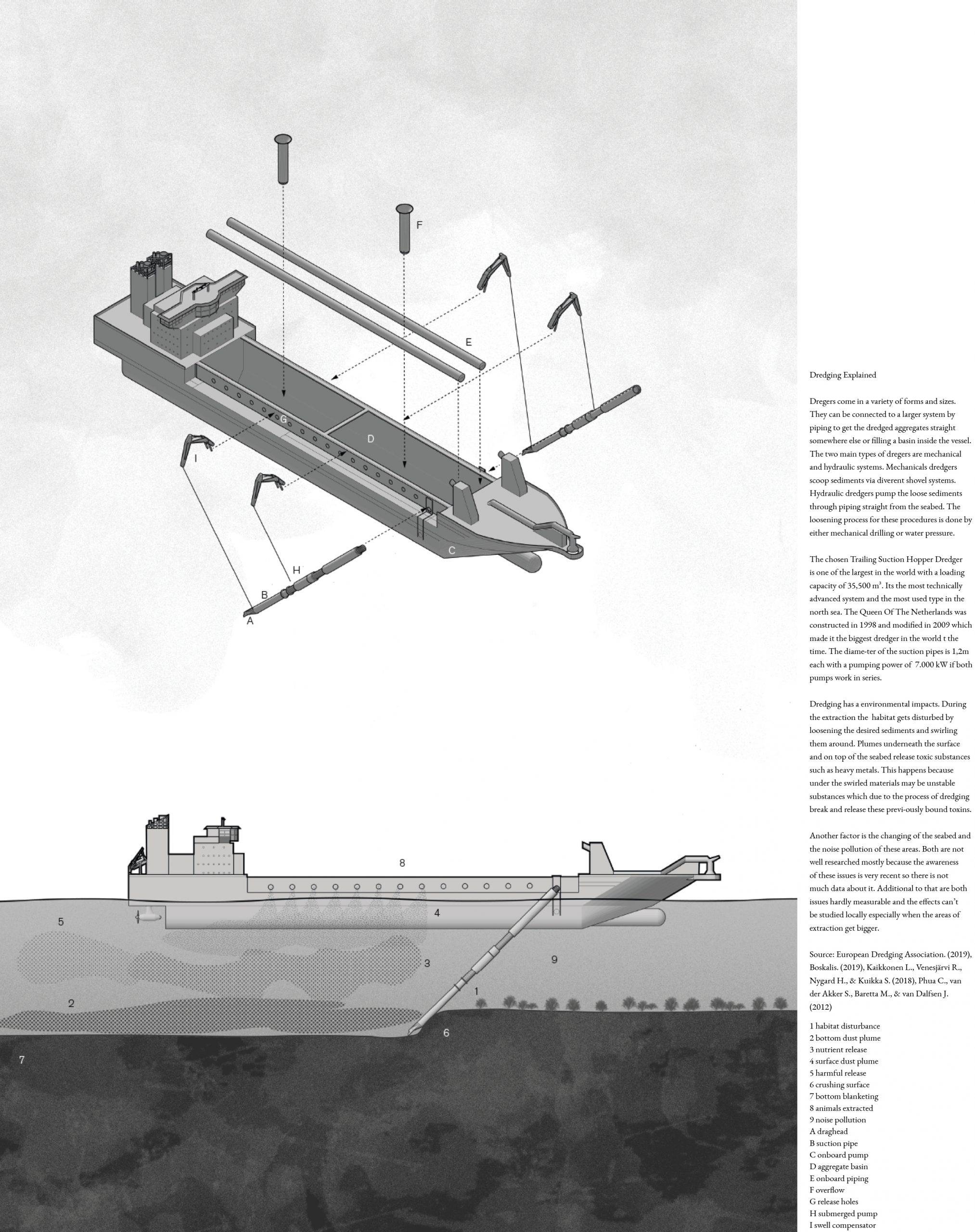 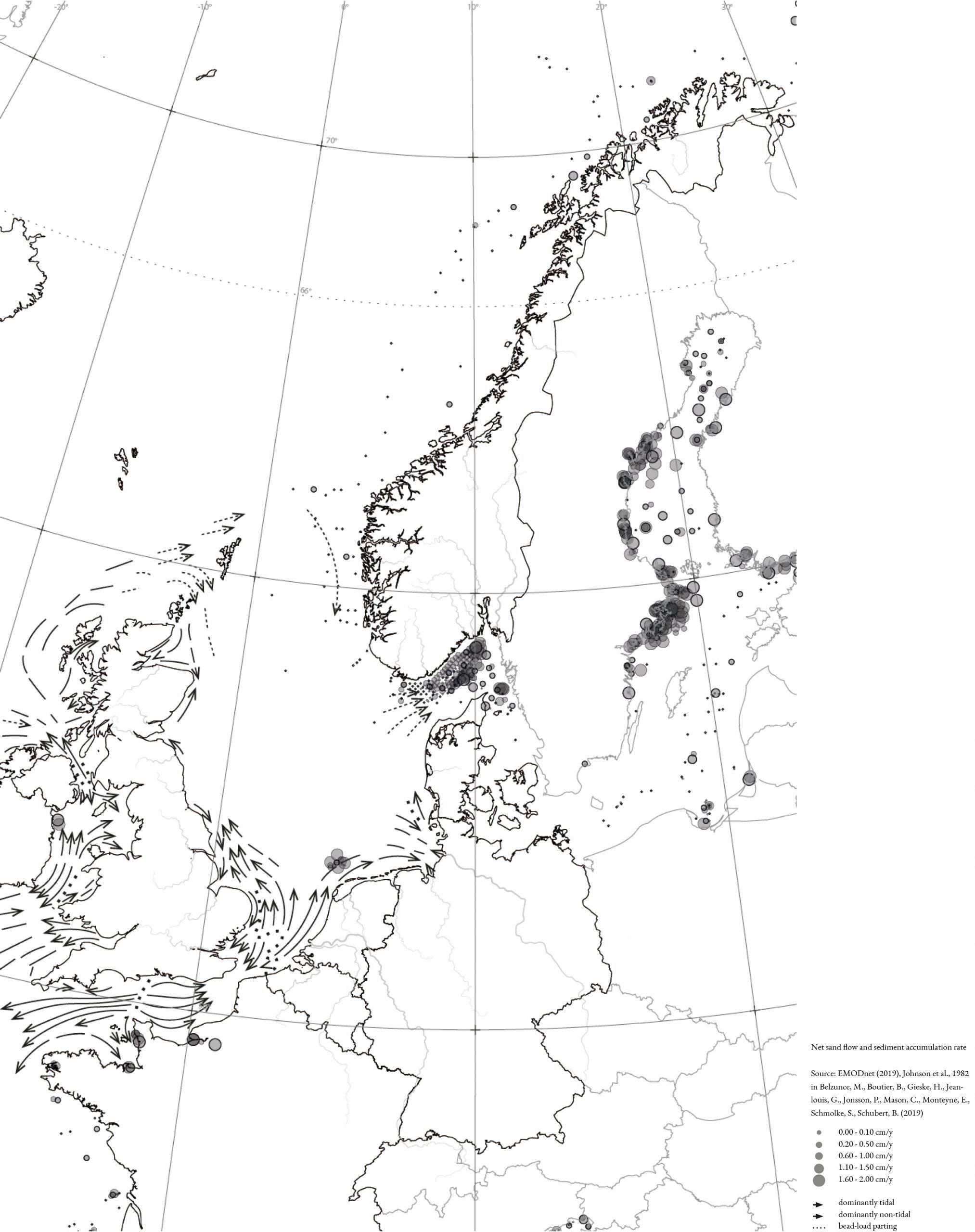 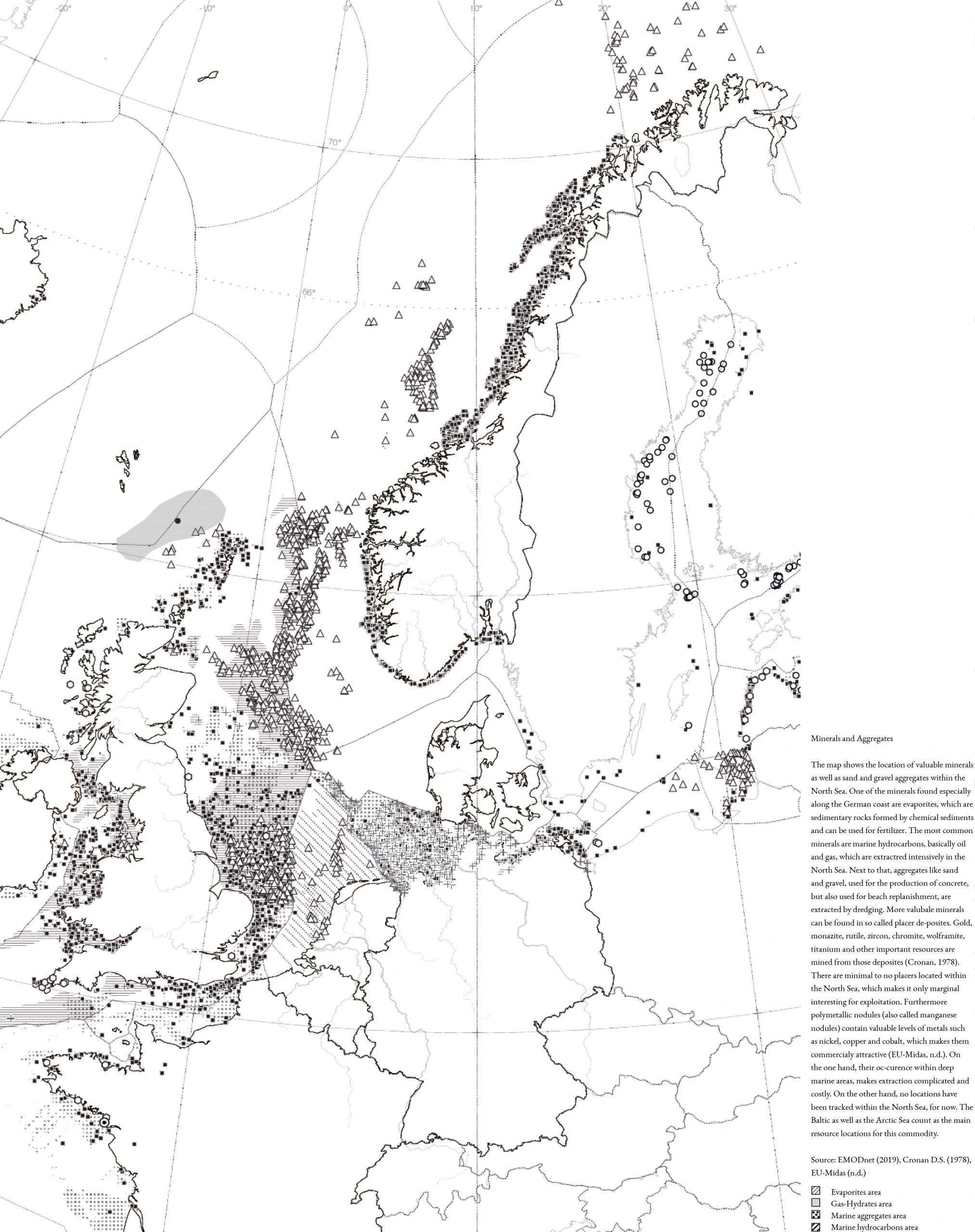 The investigations in the deconstruction chapter put the conclusions from the mapping phase in spatial and temporal context. Furthermore the emphasis lays on the projected changes of the individual elements and systems within the investigated oceanic economies. These elements and systems are categorized on their degree of adaptability to these projected changes into static, semi static and flexible. Based on the analysis of the current economies and its predecessors economies infrastructure we come up with conclusions of an uncertain future. 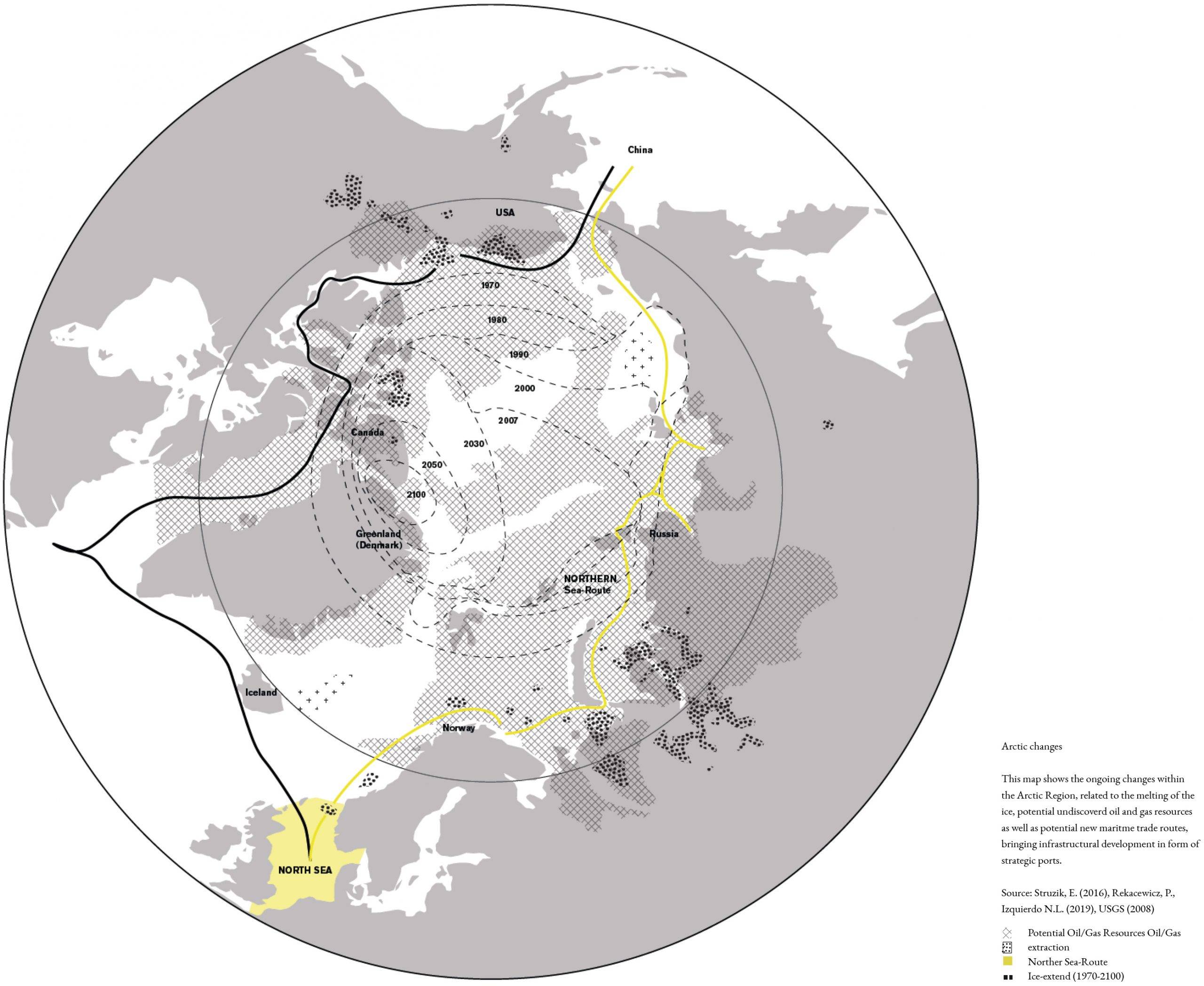 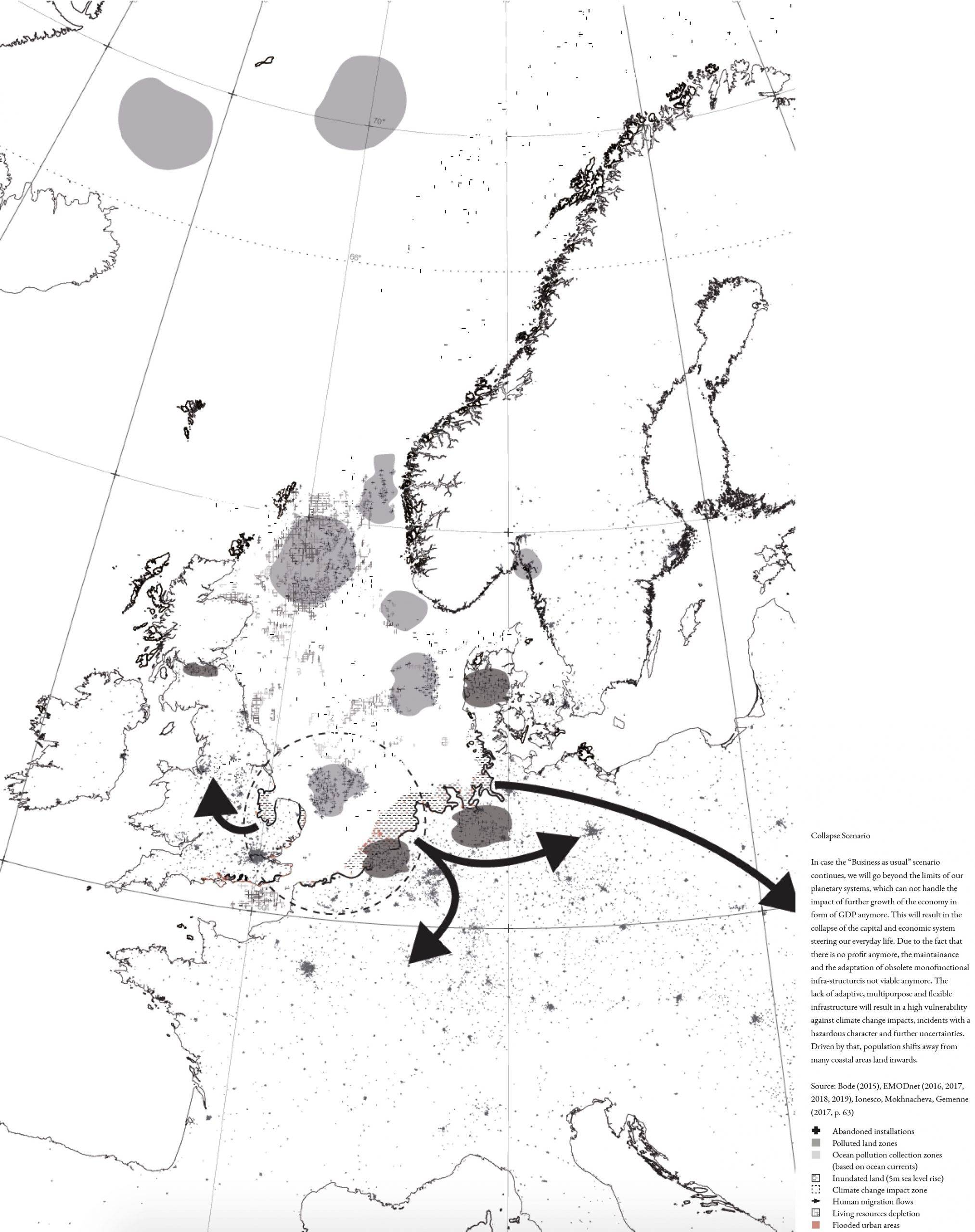 Jahnavi Bhatt – Beyond Cleansing: Transitioning Towards Socio-Ecological Resilience in the Ganges River Basin through an Adaptive Spatial Planning Model

Alexander Scho – Make Food Great Again: A Prototype for how Architecture should respond to the 4th Agricultural Revolution, to take Action in its Acceptance in Society